Not to be confused with A Plumber's Lament.

Statue Mario (also known as Mario Statue[1] or a Statue[2]) is a derivative form of Tanooki Mario that debuted in Super Mario Bros. 3. While in this form, the Mario Bros. are invulnerable to all enemies, though they are immobile.

In Super Mario Bros. 3, this form resembles Kṣitigarbha, the protector of travelers and the guardian of souls, who is known as Daigan Jizō Bosatsu in Japan.

at the same time. As a statue, Tanooki Mario cannot move, but he cannot be hurt either, and if he uses this ability in the air, he can defeat many enemies, instantly destroying all Goombas and enemies with throwable shells (like Koopa Troopas, Buzzy Beetles, and Spinies). The statue can also stomp previously unstompable enemies like Piranha Plants, Piranhacus Giganticuses, Venus Fire Traps, Spiny Eggs, Thwomps, Podoboos, Firesnakes, and Chain Chomps.

The Statue form is also the only way to destroy Roto-Discs and Rocket Engine flames. Statue Mario sinks rapidly underwater, and can even oppose some pipes' upward currents. This allows Mario to stomp Lava Lotuses, Bloobers and fish enemies underwater. Boss Bass is the only fish that Mario cannot stomp on, and the only enemy that can defeat him in that form by eating him. In Super Mario All-Stars, tornadoes can turn Statue Mario back into Tanooki Mario on contact. He can still turn into the statue while in the tornado, but it does not free him nor have any desirable effect. Statue Mario also automatically reverts to Tanooki form after five seconds.

In Super Mario 3D Land, Statue Mario or Luigi is used with a Statue Leaf instead due to the absence of Raccoon Mario and the Tanooki Suit. Mario's Statue form now wears a red scarf and depicts Tanooki Mario raising his right hand, and Luigi's Statue form instead wears a green scarf while showing Kitsune Luigi raising his left hand.

Mario or Luigi cannot transform on the ground, as the statue transformation replaces the Ground Pound; he can pound in raised stumps with only one pound, as opposed to needing two ground pounds with other forms. The longer

In Super Mario 3D World and its port, despite Tanooki Mario's reappearance, neither Statue Mario nor the Statue Leaf return. But, if Mario uses a Lucky Bell to turn into Cat Mario, he can transform into Lucky Cat Mario, which functions similarly to Statue Mario, though Mario is invincible (rather than ignored and invulnerable) and earns coins while falling in that form. Similar to the Statue form, Lucky Cat characters raise their right paw (left for Luigi).

Mario as a Jizo in Super Mario Odyssey

In Super Mario Odyssey, when Mario captures a Jizo, it looks like the current appearance of Statue Mario. Unlike in prior games, he can move while using one, letting him line up with other Jizo statues (for a Power Moon), collect additional coins or Hearts from glowing spots, weigh down P Switches, and break certain cracked blocks. Uncaptured Jizos also resemble the original appearance of Statue Mario in Super Mario Bros. 3. 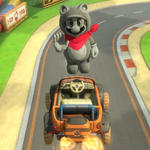 One of Tanooki Mario's tricks (which is anti-gravity-specific in Mario Kart 8, Mario Kart 8 Deluxe and appears randomly in Mario Kart Tour) is briefly transforming into this form before turning back.

This form returns in Puzzle & Dragons: Super Mario Bros. Edition as an unlockable form. Statue Mario, who is Light/Fire-attributed, is gained after ★World 1 is cleared; his skill "Statue Shine" changes all orbs into Light Orbs and Heart Orbs, and his leader skill, aptly named "Mario's Luck", raises the team's attack power by 3x, as long as their HP is 50% or more of the total. Statue Luigi, who is a Light/Wood character, is unlocked after beating ★World 2; his "Statue Flash" skill turns Heart Orbs into Light Orbs, and his leader skill "Luigi's Luck" increases the team's attack power by 3.5x after attacking with 4 or more attributes at once. 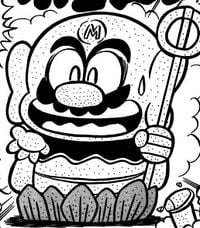 Statue Mario appears in Super Mario-kun. They use this form even without the usage of a Tanooki Suit and, unlike in the games, Mario can move and even fight his enemies as a statue. A running gag sees Mario or Luigi using this power-up underwater, sinking to the bottom. In a chapter from volume 6, Mario and Luigi are turned into stone by Sphinx Zō. However, only Mario resembles the Super Mario Bros. 3 statue.

In volume 46, Luigi wins two Statue Leaves from a raffle held by a Monty Mole wearing glasses. Mario and Luigi then use their statue forms in order to defeat the Morty Mole that was attacking the festival.