The following is a list of damage calculations for clearing Orbs from the game Puzzle & Dragons: Super Mario Bros. Edition. 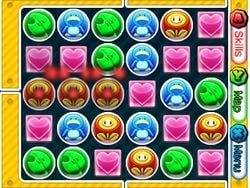 A Fire Combo made.

When the player clears three Orbs or more on the Orb field, it counts as a single Combo, marked by the sound of a Coin being collected in the Super Mario games, as well as the amount of damage to be dealt displayed on the teammates' cards. Teammates attack only when the Combo of the elemental Orbs just cleared matches with their attribute, as indicated by their cards glowing that color briefly (e.g., when a Fire Combo is cleared, all teammates with Fire as their main/sub-attributes will attack). Likewise, Heart Orbs recover HP only when Heart Combos are cleared.

The ATK for a single combo is 100% of the teammates' base ATK. For every additional Orb in the Combo, the damage is increased by 25% (e.g., four Orbs cleared is 125% damage, five Orbs is 150%, six Orbs is 175%, and so on). This also applies to the teammates' RCV when clearing Heart Orbs. The more Combos of a certain Orb type are cleared, the more damage/healing power will be dealt. The player can clear up to 30 Orbs at once. 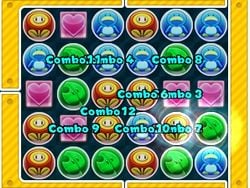 Once all of the Combos have been made during the player's turn, including "skyfall combos", the damage to be dealt from the teammates' cards hop and rise in number for as many times the player has cleared Combos for. Likewise, the same also applies to the amount of HP to be recovered on the player's health bar after clearing Heart Combos. For every Combo made after the first increases the ATK/RCV by 25% (e.g., two Combos cleared is 125% damage, three Combos cleared is 150%, and so on), regardless of whether the player has matching/available Orbs that turn. These multipliers are added after all damage/recovery from making the Combos has been calculated. 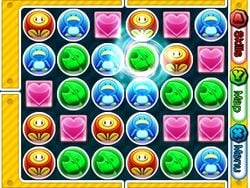 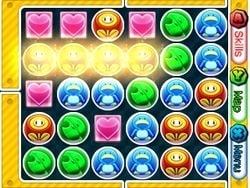 A Fire Twin Attack made.

With the digital update to version 2.0, some teammates can use the Awoken Skill, Twin Attack, to raise their own ATK for each attribute the player clears exactly four Orbs for (horizontally or vertically). In addition to the raised attack power for that teammate, they also hit two enemies at once for each of their attributes cleared (it will not target a single enemy twice, however).

The damage multiplier for Twin Attack is applied at the same time the player clears four Orbs, then rounded to the nearest whole number. For instance, a teammate with a base ATK of 200 will have their ATK raised to 250 when clearing four Orbs, and with a Lv. 1 Twin Attack in effect, the damage is increased even further to approximately 312.95 or 313 damage.

After damage from the amount of Combos and the Combos themselves from the active teammates has been calculated, damage can be raised even further with several standard and Awoken Skills that raise ATK. Such Skills can be stacked with one another, and those that are activated make a sound resembling Kamek's broom zooming by.

Some Skills raise the ATK of the player's teammates, whether for the entire team, or for teammates of certain attributes. Several of these also have drawbacks such as reducing the player's team's HP to 1 or lowering their RCV to 0. 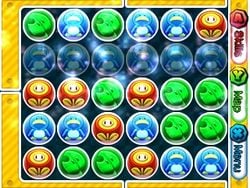 Also with the digital update to version 2.0, some teammates can use Awoken Skills -- Fire Boost, Water Boost, Wood Boost, Light Boost, and Dark Boost -- to increase the damage output of other teammates when clearing a horizontal row of six Orbs of their attribute (e.g, Water Boost raises ATK of all Water-attribute teammates).

The multiplier for an Attribute Boost Awoken Skill is applied in addition to the damage increase of 175% for clearing six Orbs. For example, a teammate with a base ATK of 200 will have their ATK raised to 350 when clearing an entire row of matching Orbs, and with a Lv. 1 Attribute Boost in effect, the damage is increased even further to 385 damage.

Once all damage calculations have been made (from Orbs Combos, amount of Combos, and ATK-raising Skills), the player's team attacks by firing miniature Orbs at the enemies. Damage is displayed next to the enemy once an attack connects (with the color of that attribute), with the total damage listed underneath (in white numbers).

If an enemy has defense, the damage of an attack against it is subtracted by its defense value, giving the final damage amount. If the enemy has more defense than the attack, it deals only 1 damage.

Damage values for attacks that connect grow or shrink if they were strong or weak against the enemy: strong attacks expand and rise in damage, weak attacks shrink and lower in damage. Curiously, attacks that connect will display having the defense calculated in before the attribute multiplier is applied, then rise or lower to the final damage amount. The damage is calculated the same.

If an enemy has a shield that nullifies damage from an attribute, damage from that attribute is reduced to 0.