Gold Goombas (or Golden Goombas) are golden variants of Goombas debuting in Super Mario RPG: Legend of the Seven Stars and appearing sporadically in the Mario Party games. In these games, Gold Goombas are found in minigames as rarer counterparts to regular Goombas, being worth three points rather than just one. Their distinction from normal Goombas varies in other appearances.

In Super Mario RPG: Legend of the Seven Stars, gold Goombas appear in the Goomba thumping game found in the Pipe Vault. They are worth three points, compared to Goombas which are worth one and Spikeys which cause Mario to lose a point. However, they are both rarer and faster than regular Goombas, only appearing for a short amount of time during the course of the minigame. One of them also appears as a statue in Garro's studio.

Gold Goombas make their first Mario Party appearance in Mario Party 5. They appear in the minigame Mario Can-Can, where one may pop out of a Goomba can.

In Mario Party 6, Golden Goombas appear in the minigame Trap Ease Artist being worth three points, like in the previous game.

They appear in the Mario Party DS minigame Goomba Wrangler, where they are once again worth three points, while regular Goombas only give one point.

Gold Goombas return in the Mario Party: Island Tour minigame Ka-Goomba!. They are worth three points.

In Super Mario Party, Goomba turns into a Gold Goomba after using a Golden Drink.

Gold Goombas also appear in New Super Mario Bros. 2. However, they are simply regular Goombas after Mario or Luigi touch a Gold Ring. The player will get 5 coins for each enemy defeated. The same applies to other gold enemies (this does not include consecutive jumps on enemies or using the Gold Flower). Goomba Towers and Paragoombas can also become Gold Goombas.[1]

In Super Mario Run, Gold Goombas appeared during a "Mega Event" running from January 31, 2017 to February 19, 2017. They were found in World Tour in certain levels at a time (indicated by a Gold Goomba icon on the level selection screen), with stages containing anywhere from one to five Gold Goombas (the later stages feature more Gold Goombas than the earlier ones). The player received 30 bonus coins at the end of the level for every Gold Goomba stomped, as well as a stamp on their stamp card, which was given to players as part of the event.[2] Gold Goomba Lite, a version of the Gold Goombas "Mega Event" in which an individual had an easier chance to get certain in-game rewards than before. 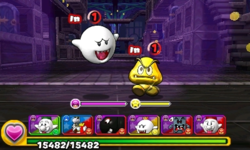 A Gold Goomba in World 8-

As enemies, Gold Goombas first use their Skill Super Boost to raise the attack power of all enemies for 99 turns. They then attack regularly by charging and slamming into the player (making metallic clanking noises). When defeated, they drop Grand Light Blocks of themselves or Star Gems. When defeated with a 10+ Combo attack, they are guaranteed to drop Star Gems. Gold Goombas award the player with a significant amount of XP compared to other enemies, but drop a regular amount of coins.

As teammates, Gold Goombas have above average stats, with an HP rating of 5/6, an ATK rating of 4/6, and a RCV rating of 4/6. Its Super Boost Skill changes one Orb on the Orb field to a Super Orb, and its Awoken Skill, Time Boost, increases the time the player can move Orbs by a short amount. Gold Goombas give HP+ bonuses to other teammates when being depowered, and use Gold Mushrooms and Grand Gold Mushrooms to increase their Skill levels.

In Mario & Luigi: Superstar Saga + Bowser's Minions, a gold variant of Captain Goomba is unlocked whenever the Goomba amiibo is scanned in the Minion Quest: The Search for Bowser mode.