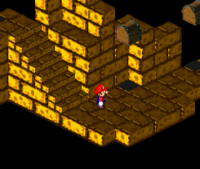 Belome Temple is an underground area in Super Mario RPG: Legend of the Seven Stars. The legendary temple is a sub-area of Land's End.

Belome Temple is located in the vast caverns underneath the desert of Land's End. It is unknown who built Belome Temple or why, all that is known is that the temple seems to honor the monster Belome. Shamans inhabit the temple and will offer their service to anyone who has entered it for a price. One of them offers Mario a shortcut back to the desert for 100 coins, while another one requires 50 coins to let him get his fortune told by hitting three statue-heads of Belome in a certain order. The fortune and price the player gets is determined by the order in which the heads were hit.

There is also a large treasure room in the temple which is guarded by a large, golden and possibly sentient statue of Belome. It will only vanish once the player gives it the Temple Key found in Monstro Town. The elevator in the temple seems to be enchanted and will either bring a traveler to the treasure room or will bring them to Belome himself, dependent on the fortune they receive before the elevator is used. If it reads "Sorry, I'm not accepting visitors past my bedtime.", the player will be sent to the Treasure Room. If it reads "Mmm, I'm so hungry! Wish I had something to eat!", the player will be taken to Belome. There is a pipe that is the only entrance to Monstro Town at the end of the temple. Lastly, the mysterious "Mokura" also wanders around the temple.