“I wonder when my next bride will fall from the sky.”
—Booster, Super Mario RPG: Legend of the Seven Stars

Booster is a character from Super Mario RPG: Legend of the Seven Stars who lives in Booster Tower with three Snifits. He is of the seventh and current generation of Boosters. Despite his wealth, Booster would rather have fun and spend his days playing with his Snifits and others he invites to his tower.

When Exor crashes into Bowser's Keep, Mario, Bowser and Princess Toadstool are sent flying in different directions. While Mario lands safely at his house, Toadstool lands at Booster's Tower. In response to this, Booster decides he must marry this woman who fell from the sky. Booster locks Toadstool on the balcony of his tower, waiting until the time is right to marry her, despite her constant cries for help.

When Mario arrives at the tower, Booster thinks he is there to enjoy his tower. He meets Mario again higher up in the tower and determines that he is the "Mario" who Toadstool has been screaming about. Booster attempts to eliminate Mario with some Rob-ombs, but Mario can evade their explosions or leave the room altogether. In either situation, it causes Booster to cry as he leaves on his toy train.

Upon reaching the top of Booster's Tower, Mario is forced to hide behind the curtains as Booster and his Snifits enter the room. He asks the Snifits if he should marry her and after one of the Snifits mentions that the wedding ceremony would be a great party, they all rehearse the wedding. Booster then realizes that Mario will show up and asks his Snifits to find the Mario doll behind the curtains. If Mario can avoid getting caught, Booster ignores him and finds his Mario doll, only to find he cannot reach it. Mario promptly jumps to retrieve it for him, and, out of gratitude, Booster gives him an exclusive item called the Amulet. If Mario gets discovered by the Snifits three times, he and his allies are forced to fight Booster. 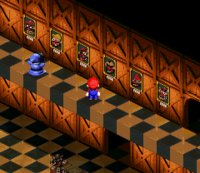 Regardless, Booster ends the rehearsal and opens the door to the balcony using the player's save file's name as the password. He takes Princess Toadstool and goes to Booster Hill. Mario gives chase, but he has to first battle Booster's clown minions, Grate Guy and Knife Guy. After dispatching them, Mario chases Booster up Booster Hill to Marrymore, the marriage resort where Booster plans to marry Toadstool. He takes over the wedding hall and kicks out Raz, Raini, and their guests. When Mario and Bowser barge into the wedding hall, they cause Toadstool to lose some of her belongings. Depending on how fast Mario collects the belongings, Booster may kiss Bowser, the lectern, or Mario. Later, Booster eats Raspberry, the bottom half of Bundt, and cries because of how delicious it is. With this, the wedding concludes and Booster and his Snifits return to Booster's Tower.

If Mario returns to the balcony on Booster's Tower after the events of Marrymore, Booster can be seen with his Snifits. He stares at the sky, thinking another potential wife may eventually fall down to him. Later, if Mario returns after the events of Nimbus Land, Valentina is seen on the balcony. She rejects Booster at first, but Booster whispers something into her ear and she falls in love with him. When she approaches him, Booster tries to distance himself from her. Viewing the balcony after this point shows them standing together.

In the ending, the two are wed with Dodo presiding over the wedding. Booster seems to get nervous with Valentina constantly getting closer to him, and he flees the wedding. In the parade during the credits, Booster rides his train. He notices that his Snifits are chasing after a beetle and jumps out of the train to join them. Afterwards, he rides in the Koopa Clown Car as Bowser chases after him.

Booster is a bit crazy and relies on his Snifits to do all his work and explain things to him. He tends to be either ignorant or even naïve at the time. He does not realize that Toadstool is yelling for help until he encounters Mario the second time or when Toadstool is crying at Marrymore. He thinks drinking punch and eating cake is complicated and proposes to boil the wedding cake in order to eat it.