Simon Belmont is a protagonist from Konami's Castlevania video game series, debuting in its very first entry. He crosses over with characters from the Mario franchise in episodes of Captain N: The Game Master and again in Super Smash Bros. Ultimate. His descendant, Richter Belmont, also appears in the latter as his Echo Fighter.

It has been requested that this section be rewritten and expanded to include more information. Reason: include more details about what Simon does in the series

Simon as he appears in Captain N: The Game Master.

Simon Belmont is a recurring character in the television series Captain N: The Game Master. In the series, he resides in Videoland (specifically the location Castlevania), and is a member of the N Team. In the pilot episode, "Kevin in Videoland", Simon helps the other heroes rescue Princess Lana, and they then battle Mother Brain and her allies throughout the show. A recurring gag in the series involved him frequently checking himself on a handheld mirror, and admiring himself. Andrew Kavadas portrayed him in the series.

Simon's various attacks involve him using his "Vampire Killer" whip. His special attacks are Axe, an axe that is a powerful projectile; Holy Water, a magical, multi-hitting projectile dealing flame damage; Cross, a projectile with boomerang-esque properties; and Uppercut, a powerful uppercut that functions as Simon's recovery move. His Final Smash, Grand Cross, involves trapping players in a coffin and destroying it. Simon's whip is long-ranged, being effective to use from far distances. Simon's forward, back, and up aerials also function as tether recoveries, making them useful for recovering when close to an edge.

In his debut trailer, he arrives at Dracula's Castle and eliminates Death shortly after the latter killed Luigi. He later confronts Dracula himself but is nearly defeated, only to be saved by his descendant Richter.[1]

Similar to King Dedede in Super Smash Bros. Brawl and Lucina in Super Smash Bros. for Nintendo 3DS / Wii U, Simon's name is announced differently in the Japanese version to reflect the pronunciation in that language. This trait is also shared with Richter and King K. Rool.

In the Adventure mode, Simon is seen standing near a cliff when he and the other fighters oppose Galeem for the first time. Although Simon is not shown to be hit by Galeem's beams directly, he, like every fighter except Kirby, is imprisoned in the World of Light, where a Galeem-serving puppet fighter of him is created. Simon is later freed after his puppet fighter is defeated, and he subsequently joins Kirby's team against Galeem and later Dharkon.

Simon is a heavy fighter, being heavier than Snake, R.O.B., and Banjo & Kazooie but lighter than Samus, Bowser Jr. (and the Koopalings), Dark Samus, and Terry, while having the same weight as Wario, Ike, Ridley, and Richter.

Axe is Simon's standard special move. When used, Simon throws an axe that travels at a high parabolic arc. The angle can be changed. The move deals high damage and knockback, and can go through solid terrain. However, it has very high startup lag. 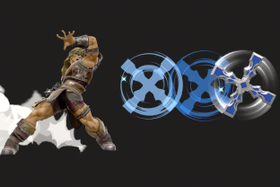 Cross is Simon's side special move. When used, Simon throws a cross like a boomerang. Unlike other boomerangs, the Cross makes no attempt to return to Simon. The Cross only flies straight forward and back. Only one Cross can be out at a time. If the Cross collides against a solid surface, it bounces back. 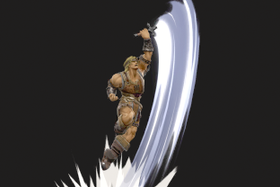 Uppercut is Simon's up special move. When used, Simon swiftly performs an uppercut while ascending with the Vampire Killer in hand. It can also be used as a recovery, though it has poor height. 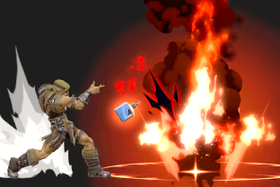 Holy Water is Simon's down special move. When used, Simon drops a flask of Holy Water in a downward arc. When it makes contact with the ground, it produces red flames. If the flask is caught by the opponent before it hits the ground, it can be thrown as an item. Only one flask or pillar of flame can exist at a time. 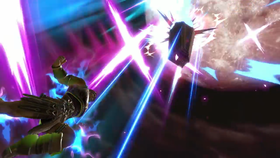 Grand Cross is Simon's Final Smash. When activated, Simon summons a large coffin in front of him, which traps nearby opponents. If successfully trapped, Simon will grab the coffin with the Vampire Killer's chain, swing it and toss it skywards, then unleash magical crosses made of energy. Once the move is completed, opponents are launched away.