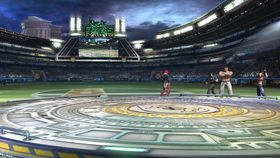 The stadium, with cameos of characters from King of Fighters and Fatal Fury

The stage takes place on a large metallic platform with a circular center and invisible walls on both sides, which can be broken by KO'ing a player. Below the stage is a grassy field with the Smash Bros. logo on it and "KOF" (for King of Fighters) written inside it. The stage also has a large jumbo tron in the background with "King of Fighters" written above it as well as a large audience watching the fight. When a player is KO'd on the stage, a set of colored smoke rockets go off in the background and four sparklers on the stage itself go off.

King of Fighters Stadium coverage on other NIWA wikis: