“Steve and Alex are two of the many incarnations of the player when they venture into the Minecraft world. Explore dungeons, create buildings, or trade with villagers–the adventure is in your hands!”
—Tips, Super Smash Bros. Ultimate

Steve is the name given to the default main player character and protagonist in Minecraft; the female default skin playable character is Alex. Steve has dark brown hair, a light blue shirt, blue pants, grey shoes, and a dark, brownish pigmentation. Alex has long, red hair, a light green shirt, brown pants, grey boots, and a much lighter skin tone. Enemies in the game include a Zombie (a green-skinned version of Steve with no hair), and an Enderman (an entirely black humanoid-like figure with small, purple eyes, and skinny, tall legs).

The game, Minecraft, and its characters were created by independent video game developer company, Mojang Studios, which was wholly purchased by Xbox Game Studios in 2014. Steve, Alex, a Zombie, and an Enderman were all confirmed to be a playable character for Super Smash Bros. Ultimate as downloadable content.

Steve is the default skin in all versions of Minecraft, with Alex being the other default playable skin available from the start. Before being named Steve, the model for the human player was added to the first public release of Minecraft on May 13, 2009. The character of Steve originally came to be referred unofficially to as "Steve?" by the game's creator,[1] but it was not until the game's official release out of beta in 2011 that the name "Steve" was made official (dropping the question mark). Zombies were added on September 1, 2009 to Java Edition Classic 0.24, Endermen were added on September 14, 2011 to Beta Update 1.8, and Alex was added on September 2, 2014 to Java Update 1.8.

On October 1st, 2020, Steve was revealed to be the second fighter of Fighter Pass Vol. 2 for Super Smash Bros. Ultimate, with Alex as well as skins based off of the Zombie and Enderman mobs being alternate costumes for him.[2] An additional video showing his moveset was presented on October 3rd, 2020,[3] Steve was released on October 13th, 2020. The name on the character selection screen changes to "Alex", "Zombie", or "Enderman" while changing costumes for Steve, to reflect their differences, much like how Captain Olimar and Alph are the same character, but get identified separately.

Steve's moveset is heavily based off of Minecraft in general (and especially that game's Survival Mode). Many of Steve's standard attacks use a sword, axe or pickaxe from the game; neutral attack and side tilt attack are quick sword swings, up tilt attack is a quick upward axe swing, dash attack is a running pickaxe swing, side smash attack is a slower but stronger sword swing, neutral air attack is a quick sword swing, forward air attack is a pickaxe swing that can meteor smash, back air attack is a backward-facing pickaxe swing, and up air attack is a quick upward axe swing. Steve also has other standard attacks that do not use those tools; down tilt attack uses flint and steel to create a flame in front, up smash attack places a magma block above then breaks it, down smash attack uses a lava bucket to pour lava on both sides, down air attack places an anvil directly underneath which falls downward, and grab uses a fishing rod to grab an opponent. Steve's grab attack involves punching the grabbed opponent, forward throw places a piston which launches the opponent forward, backward throw tosses the opponent backward with a fishing rod, upward throw uses a piston to launch the opponent upward, and downward throw drops an anvil on the opponent. Steve's neutral special move is Mine / Craft / Create Block, which functions differently depending on Steve's position: when grounded, Steve uses a tool to mine for resources; when near a crafting table, Steve uses resources to craft tools; and in the air, Steve places a block directly underneath. Steve's side special move is Minecart, which has Steve summon a minecart and ride it; Steve can jump out of the minecart, and it can grab opponents after Steve has exited it. Steve's up special move is Elytra, which uses elytra wings to glide horizontally or vertically, with Steve briefly using firework rockets as well. Finally, Steve's down special move is TNT, with Steve placing a TNT block in front; after the TNT block has been placed, Steve can place a trail of redstone dust followed by a wooden pressure plate to create a redstone circuit which can detonate the TNT block itself.

Steve's Final Smash is called House of Boom, and it uses a large Piston that pushes the fighter into a dark room if made contact, locking them inside with Creepers, Zombies, and TNT. After the room explodes, Steve eats a steak upon successfully finishing his Final Smash.

Some of Steve's attacks use tools from the game, such as a sword, an axe, a shovel and a pickaxe. Said items can break over time from being used. A Crafting Table will spawn in the background near Steve at the beginning of a match. Using his neutral special move, Steve can mine the ground for various resources. There is a limit to how many resources Steve can carry, so if he exceeds this limit, he will begin to ditch previous resources to make room for new ones. A gauge is present near the player's icon and damage at the bottom of the screen which shows Steve's current resource. The resources that Steve mines with his neutral special move will vary depending on the material of the stage that Steve is playing on. Steve can then walk over and use the Crafting Table and his mined materials to craft a full set of tools in addition to replenishing broken/damaged ones; when Steve crafts using the table, all of his tools get upgraded at the same time. The various types of tools in order of strength are wood, stone, iron, gold and diamond; gold is weaker and less durable than stone, iron and diamond, but attacks with golden tools are faster overall. The Crafting Table can be broken by any player's attacks (including Steve's own), but it will respawn after a few seconds. Steve can also summon his table near him at any time by pressing the special move button while shielding. If there are two or more Steves in a battle, they can all use one another's Crafting Tables.

Additional elements borrowed from Minecraft include Steve wielding a shield from the game if a perfect shield is performed. When Steve is put to sleep, he will sleep on one of the beds that can be crafted in the original game.

Steve's home stage is based off the various biomes from Minecraft, and it is called Minecraft World. Villagers, Cows, Chickens, Sheep, Zombies, Skeletons and Endermen appear in the background of the stage (regardless if Zombie or Enderman are being controlled by a player), but they do not interact with the action.

Steve is one of the lighter middleweights, being heavier than Toon Link and Palutena but lighter than Joker, while having the same weight as the Ice Climbers, Lucario, Wolf, Villager, and Mythra.

Steve's opponents in his Classic Mode route reference various enemies in Minecraft. All rounds except for rounds 2 and 6 are Stamina battles. 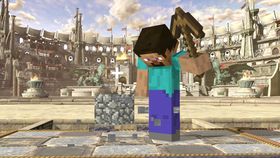 Steve mining for materials on Coliseum

Steve has three different standard specials which all require pressing the special move button in different places. Mine is used when Steve uses his standard special on the ground. He will use his tools to mine on the ground, creating materials for him. If it is used while Steve is on ground that is made of wood, he will use his axe. If the ground he is standing on is made of stone or metal, he will use his pickaxe. If the ground is made of dirt, sand, or snow, he will use his shovel. The materials he gets depends on the terrain that he mines. For example, when Steve mines stone, the most common material he receives will be Cobblestone, but he can also receive other items like Redstone, Iron and Gold ingots, and occasionally Diamonds. If the stage that is being played on is Omega or Battlefield form, the materials are mined in a predetermined order, no matter what material he mines, although he will still use the proper tool.

Steve crafting with diamond at the Crafting Table

Steve after crafting a diamond sword 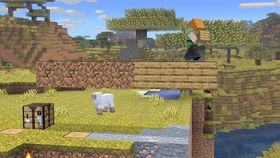 Steve's third standard special is Create Block. Whenever the player presses the special move button while midair, Steve will create a block. He will always use his lowest level materials first. The blocks will break over time and can also be broken by Steve and other players. The higher level the material is, the longer it takes to break. 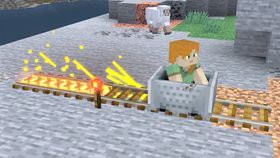 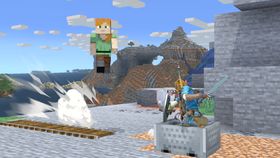 Alex jumping out of the Minecart, catching Link with it in the process 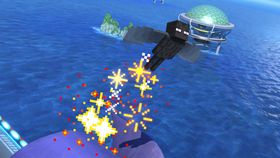 An Enderman flying with Elytra on Big Blue

Elytra is Steve's up special move. When this move is used, Steve will equip an Elytra and light a firework, sending him gliding in the air. The direction can be changed by inputting up and down. Once the firework has worn off, Steve can still glide, but he will not be able to inflict damage to opponents. The move will end when either Steve lands or the Elytra falls off, leaving him helpless. 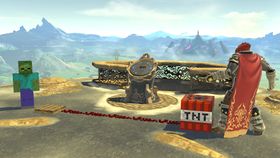 A Zombie targeting a TNT at Ganondorf on Great Plateau Tower

TNT is Steve's down special move. Steve places a TNT block, followed by an Oak Pressure Plate. Whenever the pressure plate is stepped on, the TNT explodes. Whoever detonates the TNT will take less damage than other players who are hit by the blow. If Steve has no wood, there will be no pressure plate. If this happens, the TNT will only explode when it takes enough damage. If Steve has Redstone, he can make a Redstone trail from the TNT, then place the pressure plate so that it can be detonated from a farther distance away. TNT is normally crafted with Sand and Gunpowder in Minecraft, but it is crafted with low level materials like Sand and Dirt in Super Smash Bros. Ultimate. 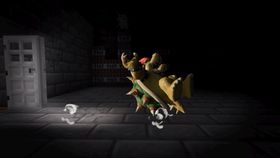 Bowser trapped in the structure, triggering the cutscene

House of Boom is Steve's Final Smash. Steve creates a huge piston, then activates it. Whoever is hit by the piston when it activates will be damaged, but only the first character will actually appear in it. The character is thrown into a dark structure made of stone bricks. The camera then switches to a first-person view of the character thrown in the structure. Several Creepers and Zombies (one of which is wearing Leather Armor) approach the character, then the camera pans out to the outside of the structure. Steve appears on the right side of the screen and eats a steak as the structure explodes.

Steve, Alex, Zombie, and Enderman share this stock conversation with all other Fighters Pass characters. It was originally used for Mewtwo, Lucas, Roy, Ryu, Cloud, Corrin, and Bayonetta in Super Smash Bros. for Wii U, who are downloadable fighters in that game.

Steve & Alex from the Minecraft™ game are coming to the Super Smash Bros.™ Ultimate game as a new playable fighter! This iconic fighter is the second fighter in the Super Smash Bros. Ultimate Fighters Pass Vol 2 DLC. Use Steve and Alex’s various tools to mine and craft your way to victory! Challenger Pack 7 also includes a new stage, Minecraft World.

Steve coverage on other NIWA wikis: