“Young Link's launch power is the weakest of the Links, but that makes it easier to perform combos. He's quicker in the air, can unleash moves faster, and is less vulnerable when landing.”
—Tips, Super Smash Bros. Ultimate

Young Link is the incarnation of Link from The Legend of Zelda: Ocarina of Time and The Legend of Zelda: Majora's Mask. In Ocarina of Time, this child version of Link turns into the adult version of himself about midway through the game after pulling out the Master Sword, and becomes known as the "Hero of Time" for his courageous efforts. In Majora's Mask, the player plays as Young Link throughout its entirety as he inadvertently embarks on a quest to save Termina, a parallel world to Hyrule, from being destroyed by the eponymous Majora's Mask.

Artwork of the young incarnation of Link from The Legend of Zelda: Ocarina of Time can be used as a stamp in Mario Artist: Paint Studio. 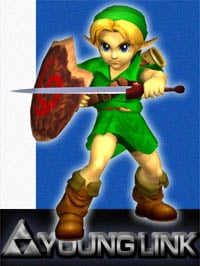 In Super Smash Bros Melee, Young Link is an unlockable character, unlocked by beating Classic or Adventure mode with 10 characters, including Link and Zelda/Sheik, or by playing 500 Melee matches, and he then must be defeated on Great Bay. Young Link's moves are similar to Link's, though while Young Link is faster and lighter, he is also weaker. As Young Link is shorter and wields the smaller Kokiri Sword, his attacks do not have as much range. Young Link's Deku Shield is also not as strong as Link's Hylian Shield, as it does not protect against stronger projectiles. Young Link, however, can Wall Jump, which Link is not able to do. Young Link is voiced by Fujiko Takimoto, who provided his voice clips for The Legend of Zelda: Ocarina of Time and The Legend of Zelda: Majora's Mask.

In Super Smash Bros. Brawl, Young Link is one of the five playable characters from Super Smash Bros. Melee who is no longer playable in this game (the other four being Dr. Mario, Pichu, Mewtwo, and Roy), possibly being replaced by Toon Link, who functions very similarly to Young Link. However, he does have a collectible Sticker, and is playable in a demo of The Legend of Zelda: Ocarina of Time.

While Young Link does not make any appearance whatsoever in Super Smash Bros. for Nintendo 3DS and Wii U, he is referenced in the trophy "Adult Link (Ocarina of Time)". Young Link is also indirectly referenced via Link's eighth alternate costume, which is almost identical to Young Link's Fierce Deity transformation. Lastly, Toon Link's Hero Bow has a custom variation based on Young Link's Fire Bow.

Young Link, after being absent as a fighter in the previous two Super Smash Bros. games (the longest absence of any playable character alongside Pichu), returns as an unlockable playable fighter in Super Smash Bros. Ultimate. Due to Link's The Legend of Zelda: Breath of the Wild-based changes, Young Link is now considered an entirely unique fighter from him, though his moveset shares a few similarities with Toon Link's. Young Link gains a Final Smash, the Triforce Slash, which he shares with Toon Link. Young Link gains his new on-screen appearance and two new taunts, and Young Link can give a battle cry during a victory animation.

Young Link benefits from universal changes: his overall mobility is faster, his short hop timing is reduced, his aerials have less landing lag, and he can use ground attack out of a run and use his aerials on ladders. Young Link's recovery is better, since his double jump grants more height, while directionally air dodging does not leave him helpless anymore. However, Young Link's air and falling speeds are decreased, unlike fellow veterans; additionally, some of his moves deal less damage and knockback, or more startup and ending lag.

In the World of Light, Young Link's puppet fighter is fought in the Triforce of Courage section of the Sacred Land, referencing his home series. He must be awoken to progress the story, along with Ganondorf, Zelda, Sonic, and Cloud.

Young Link's Classic Mode route pits him against fighters from The Legend of Zelda series. 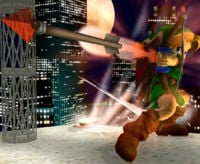 The Fire Arrow, known as the Fire Bow in Super Smash Bros. Melee, is Young Link's standard special move, based on the Fire Arrow upgrade recurring throughout The Legend of Zelda series. The move deals less damage than Link's Bow, and the arrow does not travel as far, but has a longer hitstun and deals fire damage. 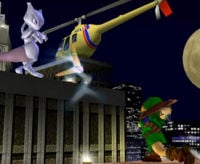 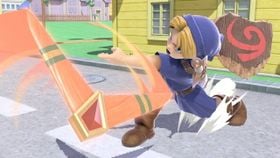 The Boomerang from The Legend of Zelda series is Young Link's side special move, shared with Link and Toon Link. It is designed specifically after the one used in The Legend of Zelda: Ocarina of Time. When thrown, the Boomerang damages any opponents it hits and automatically returns to Young Link once it hits an opponent or wall. The player can hold the control stick to make it fly farther, and it can also be thrown diagonally. The Boomerang can also fly up or down while it is active by tilting the control stick just before throwing it. Compared to Link's Boomerang, Young Link's Boomerang does not travel as far, and it is not as powerful, but it can be controlled better.

The Spin Attack is Young Link's up special move. Shared with Link and Toon Link, the move is based on the Spin Attack move recurring throughout The Legend of Zelda series. When used, the character spins around rapidly with their sword to deal damage. When used in the air, the move also gives the character some vertical and horizontal distance. Unlike Link's Spin Attack, Young Link's version of the move, as well as Toon Link's version, can draw in opponents to deal multiple hits, although Young Link's has less range. 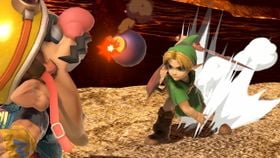 The Bomb is Young Link's down special move, shared with Link and Toon Link, and based on the item recurring throughout The Legend of Zelda series. Young Link's Bomb in particular is based on the ones from The Legend of Zelda: Ocarina of Time. When used, Young Link pulls a Bomb out that can then be thrown at other characters to do damage, exploding on impact. Like other explosives, the bombs also deal damage to the holder; it can also be caught and thrown by opponents, or detonate in the player's hands. Unlike Link and Toon Link's Bombs, the explosion from Young Link's Bombs can hit multiple times. The player cannot use the move while holding another item, as Bombs count as an item.

In Super Smash Bros. Ultimate, Young Link gains the Triforce Slash as his Final Smash. Like with Toon Link (and Link in the previous games), Young Link fires an arrow and traps an opponent between two Triforces. He then rushes forward and repeatedly slashes at them before thrusting and launching them away.

Young Link appears in the microgame Ocarina of Time in WarioWare: Smooth Moves (found in 9-Volt's stage). The object is to have him pull the Master Sword by the Janitor form, and he will transform into a different form depending on the level: Adult Link on level 1, an elderly Link on level 2, or a Cucco on level 3. This microgame reappears in WarioWare Gold.

"He’s back after 17 years! Young Link is faster than Link but he’s also lighter, making him easier to launch."