Sir Isaac Newton was an English mathematician, physicist, astronomer, alchemist, theologian, and author well known for developing three fundamental laws of motion. He is one of the historical personages helped by Mario in Mario's Time Machine.

Isaac Newton was born on December 25, 1642 in Woolsthorpe. During his early years, he was rather uninterested in his studies, but this changed upon his enrollment in Cambridge University. However, his studies there were interrupted when the Great Black Plague broke out in London in 1665. This did not stop Newton from his work, however, and in just two years back on his family farm, Isaac Newton invented calculus, made groundbreaking discoveries in the field of optics, and first formulated his theories on gravity. At the age of thirty, he was made a full-fledged member of London's Royal Academy of Sciences. 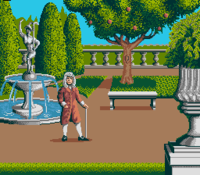 Isaac Newton in the SNES release of Mario's Time Machine

In the MS-DOS and SNES versions of Mario's Time Machine, Bowser, as part of a plot to create a museum of historical artifacts as well as destabilize the timeline of Earth's history, travels to 1687 in his Timulator and steals the apple that Isaac Newton should have observed to assist his contemplation on gravity. Mario, seeking to repair the damage Bowser caused, used the Timulator himself to return the apple to 1687. After some research into why it was historically important, Mario put the apple back into the tree so it could later fall for Newton.

Bowser's plot goes as described above in the NES version of Mario's Time Machine. However, Mario's method of returning the apple goes somewhat differently. Rather than talking with people around Cambridge University, including Newton's fellow Royal Society members, Mario instead gets his information from info boxes to learn about Newton and the apple. Instead of returning the apple to Newton directly, Mario instead returns it to the tree.

In either case, the return of the apple to its proper point in time sparks Newton's interest in studying gravity, leading to the publication of "The Principia". Newton would go on to publish other works as well, such as "Optics". In the modern day, whereas Einstein is highly regarded in the field of atomic physics, Newton is still regarded for his work in more applicable physics, such as those that helped rockets get to the moon.