“You are just in time, my small friend. A new era is dawning for the people of India. Thank you, Mario, I shall not forget you.”
—Mahatma Gandhi, Mario's Time Machine

Mohandas Karamchand Gandhi (2 October 1869 – 30 January 1948), better known by his honorific, Mahatma, was an Indian lawyer, anti-colonial nationalist and political ethicist who was instrumental in helping India gain its independence from the United Kingdom. He campaigned through nonviolent tactics and actively sought to prevent bloodshed against anyone. Through imprisonment, riots, and a massacre against the Indian people, Gandhi maintained his passiveness, and he became a persuasive and highly revered figure in India. Gandhi eventually succeeded in realizing an independent India in 1947, though he was assassinated in 1948. At the time of India's first day of independence, Gandhi was in Calcutta, attempting to quell some of the emerging riots, but according to Mario's Time Machine, Gandhi was there to celebrate India's independence alongside its citizens. However, before they could fly India's new Flag, it is stolen by Bowser, and Mario, attempting to return the flag, meets with Gandhi in Calcutta.

According to the biography given for Gandhi in Mario's Time Machine, he has earned a considerable amount of prestige throughout his lifetime and beyond. He was born in India in 1869, and studied law in Great Britain before settling in South Africa. There, he used a movement called "satyagraha" to actively but nonviolently resist the British's unjust laws. Eventually, he was satisfied with the results, and returned to India so that he may attempt the same tactics. However, although he originally seeked to cooperate with the British, a massacre conducted by the British against Indian nationalist broke out, which led him to perform direct protests against Great Britain (while always remaining nonviolent). Gandhi gained great influence for this, earning him the prestigious title of "Mahatma", and by threatening to fast himself to death, he managed to unite the Indian people against the British. During World War II, Gandhi refused to cooperate with the British, landing him in jail for two years. After his release, Gandhi organized conferences with British Viceroy Mountbatten which led to the independence of India. The following year, Gandhi is unfortunately assassinated. 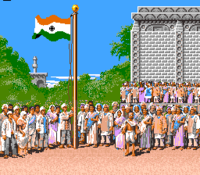 Mahatma Gandhi in the SNES release of Mario's Time Machine.

During Mario's Time Machine, Gandhi is in the middle of Calcutta, surrounded by a crowd of people and ready to fly the Indian flag in celebration of India's independence. However, with the flag stolen, Gandhi could only wait. Mario, when he first visits Calcutta, can immediately go talk to Gandhi, but Gandhi ignores him, only saying that there is some kind of delay. Mario can only give the Flag in his possession to Gandhi after talking to the other inhabitants of Calcutta, all of whom freely divulge Gandhi's backstory. Once Mario absolutely confirms the situation, he can return to Gandhi and give him the flag. Gandhi thanks Mario for helping start a new era for the people of India, and promptly lets the flag fly. Mario then asks Gandhi if he has seen any Koopas lately. Gandhi denies it, but he notices that Mario is constantly facing new struggles, and suggests that he defeats his adversaries through the nonviolent resistance that Gandhi practices.