“That's not Baby Mario! He looks decidedly...stouter. And he...smells funny. He must be Baby Wario!”
—In-game text, Yoshi's Island DS

Baby Wario is the infant version of Wario, who made his first appearance in Yoshi's Island DS. He appears to be very greedy similarly to his adult counterpart, as he carries a Coin magnet. Baby Wario's special move is "magnetism", in which he pulls out a magnet which attracts coins. His magnet is also capable of raising metallic platforms and moving large, metal boxes.

Wario also appears as a baby in a scene of the German Club Nintendo magazine comic Warios Weihnachtsmärchen, though not as the character Baby Wario.

When Baby Wario was originally kidnapped in Yoshi's Island DS, the Toadies found his crying to be annoying, so they left him alone in World 3-5. Some time after that, Yoshi finds Baby Wario after being washed away by a large wave and separated from the Stork and the other babies. Baby Wario assisted Yoshi throughout the rest of World 3, but leaves him after World 3-8, joining up with a group of Bandits in hope of even more riches. Yoshi and the rest of the babies meet up with Baby Wario one last time in Bowser's Castle. He helps the Yoshis by defeating Bowser on the back of Purple Yoshi. After the castle is destroyed and the team finds the babies, Baby Wario lands on a very large Treasure Chest filled with treasure. However, Baby Bowser also lands in the treasure, initiating an argument over it.

At the end of the game, it is revealed that Baby Wario, like Baby Mario, Baby Luigi, Baby Bowser, Baby Donkey Kong, Baby Peach, and Baby Yoshi, is one of the seven star children. 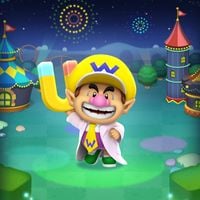 Baby Wario as he appears in Dr. Mario World

Dr. Baby Wario's skill in stage mode is to collect all the coins within a 3x3 targeted area, which include the virus coins in the background, every coin in the Coin Blocks and Muddy Coins no matter how much mud are covered on them. The only coins that cannot be collected this way are barriers that are activated, caged coins with its cages intact or coins within colored cages. The way this skill works is that after it is activated, Dr. Baby Wario will prepare his magnet, and then a target will move around the stage. By tapping the screen, coins within the range will be collected with the magnet. Prior to version 2.3.0, the target moves in a predetermined direction in a cycle, but since that version, the target moves slower and in random directions orthogonally. Since version 2.3.0, using this skill when there are no coins in the stage will instead eliminate one random virus or object, whereas previously this skill will proceed as normal even though there are no coins to be collected. In versus Mode, Dr. Baby Wario's skill sends three, six, nine or twelve purple coins to the opponent's play area at level 1 to 4 respectively. At level 5 this skill also sends 12 coins, but the skill meter is filled a faster rate compared to level 4. Coins sent by Dr. Baby Wario can be eliminated through making a capsule match next to it or eliminating it directly such as using a skill on it.

Baby Wario shares many physical qualities with his adult counterpart. They both wear a yellow cap, have cyan lines around their eyes, and have a large, pink nose. Brown hair is visible under his cap. However, unlike Wario, Baby Wario does not wear gloves. Instead, Baby Wario wears nothing but a diaper and a cap (similar to Baby Mario and Baby Luigi). His teeth are also shown to be far more visible then the rest of the baby characters.

Baby Wario reappears in Dr. Mario World; he greatly resembles his original incarnation, including using the same golden magnet, but now wears a white lab coat and a yellow tie featuring his emblem, although his artwork features Mario's emblem, but directly flipped vertically and blue instead of red. He also now wears purple pants and green shoes (similar to his adult counterpart), giving him a closer appearance to the current designs of Baby Mario and Baby Luigi. 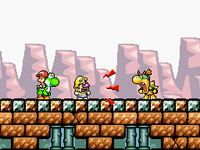 Baby Wario when he cries is the noisiest out of the babies in Yoshi's Island DS. Similarly to his adult counterpart, he has a tendency to be greedy. When Yoshi and the babies get to World 5, Baby Wario is seen arguing with Baby Bowser, implying that Baby Wario is quite argumentative. Unlike the other babies, he can talk. He is shown to be a bit more willing to work together with the other babies than his adult self is with their adult counterparts.