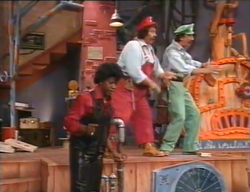 Little Robert beside Mario and Luigi, performing their routine

Little Robert is a minor character who makes his appearance in the live-action segment of a The Super Mario Bros. Super Show! episode, Tutti Frutti, oh Mario.

Little Robert first appears at the very beginning of episode, mimicking Mario's moves as he is shaving in front of the mirror, both applying shaving cream and using a razor. Mario calls Luigi over, telling him there is a mysterious man inside their mirror. Luigi, however, is already concerned about an indiscernible sound coming from the vent, caused by a drum pattern voice. Due to the Ratagator lip synching to the sound, it is believed he is the culprit, until Mario explains that it is neither him nor Clog. As Luigi interrogates the scarecrow, Mario returns to the mirror, where the man realizes where he actually is. Upon hearing the sound he and Luigi previously heard, Mario recognizes him as Little Robert, who happily confirms this as Mario and Luigi simply shrug toward each other.

The second half of the segment begins with Luigi preparing an Italian dinner for Little Robert, who is soon arriving at their apartment. As Mario questions him, Luigi reveals his plan to hide a tape recorder and get Little Robert to sing, making it a collector's item. Luigi insists this as Mario is skeptical. At this moment, the doorbell rings, and Little Robert enters. Mario becomes exuberant at his presence, and happily introduces him to Luigi. Before he is seated for dinner, Little Robert begins to sing, with Mario and Luigi going along. He becomes less enthusiastic and criticizes their performance.

Following the transition, Little Robert is seen instructing Mario and Luigi in a song and dance routine, where they serve as background vocals and he the chorus. Despite their efforts, he is once again unimpressed, offering constructive criticism. He then asks to sit down for dinner, and does just so. Mario, however, suggests he simply take the pan with him to go. At this, Little Robert becomes angered, chastising them for making him sing and now asking him to leave. Despite this, he takes the pan and shouts at Luigi as he is thanked anyway for coming over. Mario and Luigi become excited and look for the cassette, only to find it being chewed up by the Rat-A-Gator, making their entire plan unsuccessful.

Along with most guest stars in their respective episodes, Little Robert appears alongside Mario and Luigi as the credits begin to roll, prompting the Do the Mario between the brothers.