Thomas Jefferson (April 13, 1743 – July 4, 1826) was an American statesman, diplomat, lawyer, architect, philosopher and Founding Father. He had an active role in the country's politics, drafting its Declaration of Independence in conjunction with the Committee of Five, then holding various positions in the country's government, notably being its third President. However, in Mario's Time Machine, Bowser travels back in time to Philadelphia on July 4, 1776 to steal the Declaration of Independence before Jefferson and the other Founding Fathers can sign it, and Mario brings back the document so that it can be returned.

Thomas Jefferson was born in Shadwell, Virginia on April 13, 1743. He then pursued studies in law before becoming a delegate the House of Burgesses, pushing strongly for personal liberty and specifically refining slavery. As a reaction to British control over the United States (then the Thirteen Colonies), he published A Summary View of the Rights of British America, calling for them to separate from the British and become independent. He was soon charged with drafting the Declaration of Independence, and after several revisions, the document was ratified and signed by the members of the First Continental Congress. In 1782, his wife Martha passed away, leaving him devastated, and he never married again. Over the years, he served as the second Governor of Virginia, the first United States Secretary of State, the second Vice President, and the third President. After he retired from his political activities, he moved to a plantation of his design, Monticello, and later founded the University of Virginia. He contributed a significant amount of books to the Library of Congress after it was destroyed in the War of 1812, helping reform its collection. 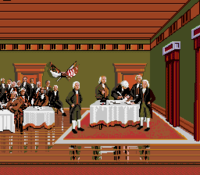 According to Mario's Time Machine, Thomas Jefferson was in Philadelphia at Independence Hall, worrying about the location of the misplaced Declaration of Independence. As Mario does not know that he is talking to Thomas Jefferson, nor that he is in possession of the Declaration of Independence, he can only ask Jefferson why everyone is inside the building. To gain more knowledge, Mario must question the Philadelphian locals about the area. Many of them (including Benjamin Franklin) talk specifically about Jefferson and his entire history. Once Mario knows enough, he can return to Jefferson and properly deliver the document. Jefferson immediately gets everyone to sign it, prompting John Hancock to start first, and thanks Mario profusely. He then says that Mario has helped create a new country, and that someday, he may have his face on a mountain (referencing Mount Rushmore, which has Jefferson's face carved into it).