This article is about the building located in Washington, D.C.. For the location from Super Mario Bros. 3 sometimes named White House, see White Mushroom House. 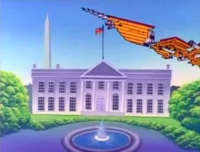 The White House, with the Doomship in close proximity

The White House is a building located in Washington, D.C., and it is the home of the President of the United States of America. It has made a few appearances in the Mario franchise.

The White House has made two appearances in the various Mario cartoons produced by DIC Entertainment. It first appears briefly towards the end of the animated segment of The Super Mario Bros. Super Show! episode "Plummers Academy", in which the President awards Mario and Luigi with a Golden Plumber's Helper and a Golden Wrench respectively.

The White House later reappears with a much larger role in The Adventures of Super Mario Bros. 3 episode "Reptiles in the Rose Garden". In it, Bowser uses a Levitation Beam to warp the White House and everyone inside to Dark Land, so that Kootie Pie Koopa can take the President's place as "Ruler of America". Later on, the White House is transported to the bottom of the Mushroom Sea, where it starts flooding with water. While Mrs. President is frightened; her husband is too busy talking on the phone to notice anything. Eventually, Mario arrives and rigs a device made out of pipes to drain the water out of the White House, allowing it to rise to the surface. Eventually, Mario manages to warp the White House back to Washington D.C., but he accidentally places it on top of the Washington Monument. He eventually drops the White House back where it belongs, nearly crushing Kootie Pie.

The White House in the PC release of Mario's Time Machine

In Mario's Time Machine, Mario travels back in time to the White House in 1863 to return the Spectacles of the then-president Abraham Lincoln after they are stolen by a time-traveling Bowser. As Mario does not know that they belong to Abraham, he questions various people within the White House about them, including Mary Todd Lincoln, Frederick Douglass, and Abraham's speechwriter. Eventually, Mario learns the truth and visits Abraham in his office to return the Spectacles, letting him present his Emancipation Proclamation to his Cabinet. Mario then takes his leave.

The White House is also seen in the Club Nintendo comic "Donkey Kong in: Banana Day 24". Donkey, Cranky, Diddy, Dixie, and Kiddy enter it to talk to the President.