Kloaks are undead members of the Kremling Krew who only appear in Donkey Kong Country 2: Diddy's Kong Quest. They are floating green, buttoned waistcoats with skull buttons, a yellow undershirt, red cuffs, and a pair of glowing, red eyes beneath their red collar. Their coats are similar to the ones worn by Krooks. They do not appear in Donkey Kong Land 2. 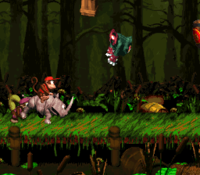 The main attribute of Kloaks is throwing objects or basic enemies at Diddy and Dixie. These enemies let out a menacing laugh as they pick out an item to throw. Each Kloak throws a certain number of objects, and some only throw one thing. After throwing the item, the Kloak floats away, although some first swoop at the Kongs before leaving.

Kloaks usually throw objects that injure the Kongs, such as Crates and Barrels, or enemies like Spinies and Zingers. However, some of them may throw a useful item, like a Treasure Chest or Bananas. Kloaks are one of the easier enemies to defeat. The Kongs can do so by either picking up a projectile and throwing it at the Kloak, by jumping on its head, using Team-up, or with the assistance of an Animal Friend. Kloaks most often appear in swamp or haunted-themed locations, which are respectively featured in the worlds Krem Quay and Gloomy Gulch.

In Barrel Bayou, there is a Kloak who throws down a Treasure Chest containing a kannonball. The only way to open it, and in turn access a Bonus Area from a nearby kannon, is to attack the Kloak with the Chest.

According to the end credits, Kloaks are categorized under the "Kremling Kutthroats" class, which indicates they are Kremlings; this is further strengthened by them sharing the same defeated voice clip as Klingers and Krooks. The instruction booklet also describes them as Kremlings.

In the Game Boy Advance remake of Donkey Kong Country 2, a single Kloak appears in the Funky's Flights II challenge "Cool Sounds". Guarding Funky's lost ghetto blaster deep in an ice cave, the Kloak attacks by throwing barrels, and unlike every other enemy that appears in the Funky's Flight II missions, takes multiple shots from the Gyrocopter to defeat, instead of just one. Kloaks do not reappear in Donkey Kong Land 2.