Red-Hot Ride, also parsed as Red Hot Ride,[1] is the ninth level of Donkey Kong Country 2: Diddy's Kong Quest and the fourth level of Crocodile Cauldron. It is the second level to take place in a volcanic setting, the first being Hot-Head Hop. In the level, while there are ground platforms, Diddy Kong and Dixie Kong must ride on Hot Air Balloons throughout to get across wide pits of lava. The Hot Air Balloon slowly descends into the lava, so the Kongs must constantly move above thermals along the way, in order to keep it airborne. Diddy and Dixie often have to jump from Hot Air Balloons as they move across the lava.

After the letter K, the Kongs can optionally open a Rambi Crate on top of a rocky hill. The Kongs can ride Rambi throughout the first half, and Rambi can assist them until they cross the No Animal Sign, which appears just before the Star Barrel. Rambi is required for breaking open the entrance to the first Bonus Level. Zingers are the most common enemy in the level, and they often appear above the lava where the Kongs must carefully navigate the Hot Air Balloon around them. 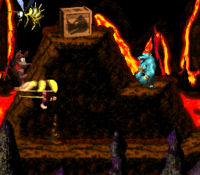 Dixie hovers in front of the rocky hill with the Rambi Crate.

When the heroes begin the level, they find themselves outside of a tunnel with a Banana Bunch ahead of it. A raised area of ground is near of here that they can climb to find a Klobber and a wide pit of lava with a Hot Air Balloon suspended by a thermal above it. A group of bananas are to the right of the banana, and they form the shape of an arrow, which points to the right. Once the Kongs cross this pit, they come up to another high piece of land on a solid, rocky area of ground. They can find a Kruncha here, who is followed by a lava pit with two thermals in it. The first of the thermals holds up a balloon that the heroes can ride on to cross the pit, and the letter K is between it and the following thermal. After the primates glide past the second thermal, they reach a Banana Bunch and another area of ground, where they can find a rocky hill with a Kruncha and an animal crate containing Rambi on it. The Kruncha stands on a slightly lower part of the ground than the crate, which sits to the right of a Zinger. If the heroes head east from here, they find a Klobber and a small pit with another Zinger above it. On the other side of this small pit, they can find another Klobber on a flat piece of ground and then another wide pit.

A thermal keeping a Hot Air Balloon suspended in the air is at the beginning of the gap, and the Kongs can ride over the pit if they ride on the balloon. Two thermals are ahead of here to raise the balloon, and a pair of Zingers, one of which that guards a Banana Coin, are between them. If the heroes continue forward from here, they reach another thermal with two Zingers above it. They must pass the thermal quickly to avoid being pushed towards the enemies. Once they pass an additional thermal, they reach a Zinger that flies above the letter O. A thermal is behind the enemy that can push the Hot Air Balloon carrying Kongs into it. Four more thermals are farther ahead of here, and a Zinger and a Banana Bunch are above the second of these thermals. The thermal next to this holds a Hot Air Balloon with a Kruncha on it, who marches under a Banana Coin. An area of land is ahead of these thermals, and it carries a pair of Krunchas and a No Animal Sign. If the primates cross the sign with Rambi, the rhino disappears and they are given a Banana Bunch. On a slightly higher area of ground near here, the primates can find a Click-Clack that walks next to a small pit. On the other side of the pit, the primates can find another large, rocky platform that holds a Kruncha. They can also find the level's Star Barrel above this platform. 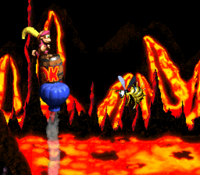 Dixie and Diddy jump onto a Hot Air Balloon with a DK Barrel on it.

To the east of the Star Barrel, the duo can find another wide pit that begins with a thermal holding up a Hot Air Balloon, which supports a DK Barrel. A Zinger is to the right of this thermal, and it is followed by a second thermal. After the heroes pass the columns of heat, they approach a few Flitters that try to fly into them. A small thermal can be found farther ahead of here, and it is followed by a larger thermal that holds up a Hot Air Balloon. This balloon is surrounded by two Zingers, who hover under the letter N and a Video Game Hero Coin. Once Diddy and Dixie pass another small thermal near here, they reach a Hot Air Balloon that holds a Neek and a TNT Barrel. The balloon is suspended by an additional thermal. They can ride along this balloon or their current balloon to reach another thermal that is located next to a trio of Zingers that the heroes must hover under to pass. They can also defeat some of the Zingers, who guard a Banana Coin, with the nearby TNT Barrel to pass them. On the other side of these Zingers, the primates can find a pair of thermals and a high, rocky platform that holds a Klobber.

A Neek marches along a Hot Air Balloon being suspended by a thermal above a pit near here. They can ride the balloon to approach a Flitter, who they can bounce on to reach another balloon on a thermal. They must control the balloon so that it leads them past a Zinger and to another Flitter with a Banana Bunch above it. A Hot Air Balloon slowly descends to the right of the Flitter, as it is not held up by a thermal. The two primates can find another Hot Air Balloon ahead of here that holds a Neek. Before the balloon falls into the lava pit, they must control it so that it hovers above a small thermal nearby. They can find another thermal farther ahead of here with two Zingers next to it. The primates must hover between these foes in order to safely progress to the next part of the pit, where there is another thermal placed under a golden feather (an item found exclusively in the Game Boy Advance version of the game). The letter G is near here next to a trio of Zingers who are all positioned above separate thermals. They must head under these foes quickly, as the thermals may push them up into the Zingers if they are too slow. After they pass these Zingers, the heroes approach a thermal next to a Hot Air Balloon that slowly descends towards the lava. They can use this balloon to reach an area of ground with an End of Level Target on it, which they must hit to complete the level. If they hit this target immediately after jumping from the final balloon before descends too much, then they win a prize (either a Banana Coin, Banana Bunch, or a Red Balloon). 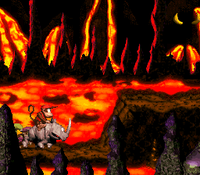