This is a list of pre-release and unused content for the game Donkey Kong Country 2: Diddy's Kong Quest. 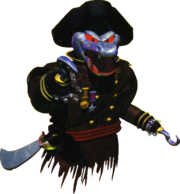 The Rare Witch Project website once had previews of several upcoming enemies and characters for Donkey Kong Country 2: Diddy's Kong Quest. Among these enemies was a sinister-looking character simply dubbed "Mr. X". Mr. X was an early version of the enemy Kackle, a ghostly Kremling that appears in the level Haunted Hall and chases the Kongs throughout the level in the final version of the game.[5][6] Mr. X was a phantasmagoric white Kremling with red eyes, wearing a large black jacket covered in army medals. He also possessed two small hooks for hands. Despite his status as a cut character, Mr. X somehow managed to be included in the official German player's guide, which cryptically states that he is a character that no one has known or has seen.

Klampons were originally Klaptraps, who were likely used as a placeholder. Web Woods did not feature any fog and Lava Lagoon did not have any lava. Mainbrace Mayhem and the boss level Krow's Nest originally took place during a storm (like in Topsail Trouble) but was changed to a cloudy blue sky in the final version. Additionally, Squawks was used in Parrot Chute Panic before being replaced by Quawks.[7]

A preview of the game was featured in the 76th issue, showing a few differences.

Additionally, a render of Mr. X is included, though the actual article makes no reference to it.

One of the unused animations of Diddy Kong.