“This crazy bird is a valuable animal to find. Although he can't really fly, he can run even faster than Rambi and can make long, wing assisted leaps. Expresso's legs, being long and spindly, are not suitable for jumping on enemies. Smaller enemies will crawl right under him, but larger ones are trouble. You can make Expresso flap his wings by repeatedly pressing the

Being an ostrich, Expresso has the appearance of a normal male one, complete with black and white feathers. Expresso only wears a pair of sports sneakers. He has the ability to run fast and glide through the air by flapping his wings. Expresso's name is a portmanteau of "express" and "espresso", a type of coffee drink. 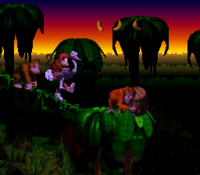 In his debut appearance, Donkey Kong Country, Expresso only appears in a few of the later levels. He cannot defeat enemies by jumping on them, and attempting it even harms him. Expresso is unaffected by Klaptraps, which pass through his long legs. Expresso has the ability to glide distances while flapping his wings.

Expresso makes his second appearance in Donkey Kong Land as one of the two Animal Buddies, the other one being Rambi the Rhino. Like Donkey Kong Country, Expresso also appears in four levels, although he mostly appears in Bonus Levels. Expresso's abilities are largely the same as in his first appearance, except he can defeat enemies, including Zingers, by jumping on them.

Expresso only reappears in the Game Boy Advance remake of Donkey Kong Country 2, as the starring and titular character of the minigame, Expresso's Racing. Prior to the game's events, Cranky Kong uses the "vast fortune" he made from his "starring role" in Donkey Kong Country to buy Expresso as a pet. Both Cranky and his pet Expresso are at Cranky's Hut.

In the original Super Nintendo Entertainment System release, a golden statue of Expresso appears in the background inside the Monkey Museum.

In the Donkey Kong Adventure story of Mario + Rabbids Kingdom Battle, Expresso makes a cameo appearance as one of Rabbid Cranky's Boombow weapons, the Expresso Atomizer. The weapon is described as officially licensed Expresso the Ostrich merch. The description also mentions that it has double kneecaps for authenticity, referencing how bird legs are composed of two intermediary articulations, although they only have one kneecap for each leg.

A stampede of Expressos appears at the start of the trailer for the canceled Nintendo GameCube title, Donkey Kong Racing.

Expresso appears in Picross NP Vol. 8 as one of the images that must be cleared.

An Expresso appears in the Banjo-Pilot course, Jinxy's Dunes. This was a leftover from the Plain Pursuit stage from the 2003 build of Diddy Kong Pilot.

A street name in New Donk City from Super Mario Odyssey is "Expresso Street". One of the store signs on the side of the buildings reads "Expresso Espresso".