Orang-utan Gang, also spelled Orang Utan Gang[1] or Orang-Utan Gang in the Game Boy Advance remake, is the fifteenth level of Donkey Kong Country and the fifth level of Vine Valley. In the Game Boy Advance remake, Orang-utan Gang was shifted to the fourth level of Vine Valley, making it the fourteenth level overall. By completing the level, the Kongs can access Cranky's Cabin and the next level, Clam City.

Orang-utan Gang is the last jungle level in the game, and it involves Donkey Kong and Diddy Kong having to walk along the treetops. It is the first level with Manky Kongs, who stand on the treetops and throw barrels at Donkey Kong and Diddy Kong. Shortly before the Continue Barrel, the Kongs can jump on an animal crate to release Expresso the Ostrich and ride him for the rest of the level. There are five Bonus Levels in Orang-utan Gang, the most of any level in the Donkey Kong franchise, and Expresso is required to reach a Bonus Level hidden under the start of the level.

At the start of the level, if Donkey Kong and Diddy walk left, they can pick up a steel keg on a tree, circled by a Zinger. If they pick it up and throw it to the treetop on the left, the Kongs can jump on the rolling steel keg to ride through most of the beginning portion of the level. 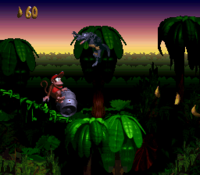 Diddy rides down some vines on a barrel 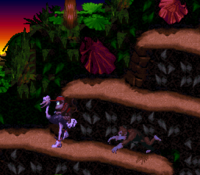 The Kongs begin the level on a line of treetops. The sets of trees in the level are connected by vines that Kritters bounce along. Behind the start, they can find a Zinger circling a Steel Barrel. After another vine, there is a curved trail of bananas nearby that lead to a solid area of land with a DK Barrel and two Klaptraps on it. This area is followed by an abyss with more treetops connected by vines with Kritters hopping along them and a Zinger circling the K Letter in the middle. More treetops are ahead, and all of them have vines. The Kongs can then find a large piece of land that consists of many ledges that hold a few Klaptraps. A small platform between pits holds the letter O. They can also find a crate containing Expresso on the top of the area, which is followed by treetops with the level's Continue Barrel.

A second DK Barrel is found on another tree following an abyss. After passing some more treetops with Manky Kongs and a tree with another Steel Barrel, there is a small pit followed by two more trees that are connected to another pair of trees with a vine. After passing another Manky Kong, the Kongs can reach an area of land that consists of a few large ledges. After that, there is a that leads to a Klaptrap and the letter N. They can find an additional Klaptrap on a higher part of the large platform, which is immediately followed by a pair of trees that hold a DK Barrel. After that, there are more sets of trees, vines, enemies, and Manky Kongs.

The Kongs then reach another large area of land that features a large alcov with a barrel. The Kongs can also find a tall piece of land behind it that they can reach with Expresso. This area contains a Tire that can help the Kongs break two ground patches that release items. After passing through the rest of the area, they can find two pairs of trees that are connected by twisted vines. Once a Manky Kong is passed, there is a large area of land with a sign on it. A tunnel leading out of the level is located after the Kongs climb over a raised piece of land with a Kritter on it.