Millstone Mayhem is the tenth level in Donkey Kong Country and the fifth and last regular level of Monkey Mines.

Millstone Mayhem is the first temple level. Two enemies first appear in the level, Krushas and millstone-riding Gnawties, the latter of which is the main enemy and obstacle. Millstone Gnawties cannot be defeated and must be avoided. The recurring enemies include blue Kritters, Slippas, and a few perched Neckys. During the second half, Donkey Kong and Diddy Kong can use a tire to bounce up to a hidden area with Winky's animal crate. 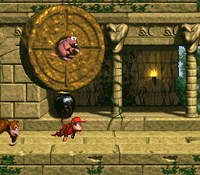 The characters dash under a Millstone

The Kongs begin the level by exiting a large tunnel and approaching a slanted wall with a tire in front of it. They can use the item to reach the top of the wall and then head down a pathway with several long, stair-like structures that a few Krushas walk along. Two TNT Drums sit at the beginning of the pathway. A DK Barrel also wobbles next to a small ledge with a millstone being piloted by a Gnawty on it. The millstone moves up and down, so the heroes can dash under it as it moves over their heads. After passing a thin abyss with a Barrel Cannon in it, the primates approach a Kritter and a millstone that they must run under. The letter O floats ahead of here near a small ledge with several Kritters to the right of it. A millstone moves on top of a large alcove nearby that the primates must run through to pass under the obstacle. The Kongs can find another millstone proceeding in a vertical path above another alcove containing a TNT Drum ahead of here. A few Krushas march down the stair-like structures ahead of here, which is followed by another small alcove with a millstone rolling from left to right above it. Once the primates sneak through the alcove and pass the Gnawty-controlled obstacle, they approach a broad alcove consisting of several jumping Kritters. A DK Barrel wobbles ahead of the gap with two small abyss after it. The level's Continue Barrel hovers over the carved, stone platform between the two pits. 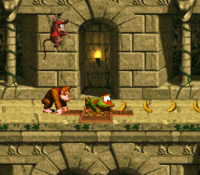 The Kongs free Winky from its animal crate

After crossing the abyss following this barrel, the heroes access a long pathway holding a TNT Drum, a Slippa, and another millstone that moves back and forth in a vertical path. Once they pass under it, they reach another abyss that they can cross to reach a large structure containing many small, stair-like structures covered in a few Slippas. A piece of the ground is here that they can break to reveal a tire that is useful in reaching a high platform nearby. It leads to a high part of the temple, located after an abyss with a millstone moving above it. An animal crate containing Winky can be found here. If the primates are not in possession of the tire when they come up to the abyss, they can ride on a moving platform to reach an area with an alcove full of Slippas in it. The letter N and an abyss can be found after the alcove.

After the duo crosses the pit, they approach a millstone moving over a ledge with another DK Barrel near it. A Necky stands on a statue ahead of here, throwing nuts at the group. The heroes can find two small alcoves ahead of the bird enemy, and both of them contain Slippas. A millstone rolls back and forth over the gaps, but once it is passed, the Kongs can safely progress to another abyss and then to an additional pair of small alcoves with an egg-throwing Necky between them. The letter G hovers over the foe's head. The primates can find another millstone ahead, which travels over a large abyss with several Slippas within it. They come to another millstone above a pit after running down several stair-like structures. A sign indicating that the level is near complete stands at the other side of the abyss on top of a small ledge. After jumping over a millstone with the use of a tire sticking out of the ground, the primates approach an abyss containing two Banana Bunches that float above a Zinger. An exit sign follows a few stair-like structures nearby, and once the heroes enter the tunnel ahead of it, they finish the level.