It has been requested that this article be rewritten.

Torchlight Trouble takes place in a dark cavern. It is the only level of the game with Squawks the Parrot, whose animal crate is at the start. Unlike the other Animal Friends (and Squawks's later appearances), Squawks follows behind Donkey Kong and Diddy Kong, and the Kongs cannot mount him. Squawks holds a flashlight to light the path ahead, although the areas behind and above are still dark. The Kongs must jump from platforms and avoid some Klumps and Krushas along the way. Oil drums and Mincers are obstacles present in the level.

In the original version, Squawks must be freed only once, at the start of the level, to have throughout the entire stage. In the Game Boy Color version, the Kongs must free Squawks from an animal crate each time they re-enter the main level from a Bonus Level. In the Game Boy Advance remake, Squawks is available from the start, so the Kongs do not free him from his animal crate. In the original version, if the Kongs did not open the Squawks Crate, Squawks still appears with his flashlight if the Kongs either reach the Continue Barrel and lose a life afterward or after they leave a Bonus Level. 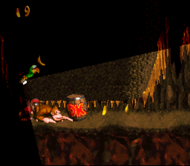 Donkey Kong crouches under the wall after the Continue Barrel

The Kongs can find a DK Barrel above them as soon as they enter the level. Squawks joins them as they walk in, lighting their path. A Klump marches to the left of a small gap with the letter K in it, which is surrounded by two oil drums. A lower platform holding another Klump is located on the right side of the abyss. Another platform carrying two additional oil drums and a third Klump is just ahead after a slightly larger pit. This is followed by a wide abyss that can only be crossed with the use of a platform that moves in a horizontal path across the pit. The letter O floats above it. A larger platform is on the opposite side of the abyss with two oil drums on the outside of it. A Klump patrols the area between them. Another small platform moves within an abyss nearby, but it moves in a vertical path. The Kongs must jump on it to reach a much larger piece of land with two more oil drums and a Klump on it. If the primates continue, they can find another platform moving in a vertical path above a pit. It can help them reach a higher piece of land with another pair of oil drums on it. There is an additional oil drum in a lower area after a nearby gap. The level's Continue Barrel waits next to it.

A low ceiling hangs in front of the heroes to the right of the barrel. They must crawl under it to pass it. As they crawl, they run into a DK Barrel and a few bananas. On the long, raised area of ground, the heroes can find a bumpy path leading past several Mincers. A Krusha marches between each Mincer, and a barrel also sits at the beginning of the area. A higher piece of land is after the third Mincer with two Krushas on it. After crossing a small gap, the two friends make their way onto a solid piece of land with two Mincers and a Krusha on it. A sign indicating that the level is almost over stands in the center of the platform. Once the Kongs jump over another small gap near here, they find themselves on a platform with a lone Mincer on it. This is followed by an abyss with a small, moving platform in it. It moves in a vertical path, so it can lift them up onto a higher area nearby. The letter N floats near the platform. Once the higher area is reached, the primates can find many Mincers ahead of them. A lone Krusha marches between the first two Mincers, while the final Mincer moves slightly up and down at the edge of a ledge. If the heroes drop down the ledge, they can find a wooden exit sign, indicating that the passage ahead leads out of the level.