Oil drums, also known as oil cans[1] or oil barrels,[2] are cylindrical metal drums filled with oil that have the ability to produce Fireball creatures or other monsters from themselves. They are untiring obstacles that recur throughout the Donkey Kong franchise.

Oil drums are first featured in the Donkey Kong arcade game as a hazard in the 25 m and 50 m stages. At 25 m, one appears on the bottom floor, left from Mario's starting position. Although harmless initially, the oil drum will combust into flames when a blue barrel is tossed into it, producing Fireball enemies which seek and attempt to harm Mario. At 50 m, another appears in the middle of the stage, between two Conveyor Belts which run toward it; this oil drum also spawns Fireball enemies, though without coming into contact with a barrel.

The oil drums are seen again and act the same in the Game Boy Donkey Kong renditions of 25m and 50m, as well as in Donkey Kong 64's port of the original arcade game. 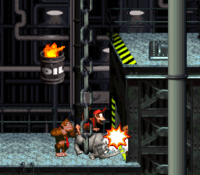 Oil drums later appear as obstacles in Donkey Kong Country. They retain their ability to expel flames, and are the main feature of the first Kremkroc Industries, Inc. stage, Oil Drum Alley, but they also appear in Torchlight Trouble. Some oil drums continuously expel flames, while others do so every few seconds; in the case of the latter variant, the time gap is lengthened in the Japanese version of the game. They are either positioned on the ground or in mid-air. In parts of Oil Drum Alley, Donkey and Diddy are required to cross abysses by hopping from one floating oil drum to the next. The only way to destroy an oil drum is by throwing a TNT Barrel at it. This is necessary at the beginning of Oil Drum Alley in order to access the level's first Bonus Level.

Black drums are similar enemy obstacles to oil drums. Appearance-wise, they are more slim and have a skull and crossbones emblem printed on them. These obstacles emit an unlimited amount of a certain enemy. Dumb Drum is a larger boss variant of the black drum.

Oil drums appear again in Donkey Kong Land, where they first appear in the second bonus room of Landslide Leap but become preponderant later in Oil Drum Slum. They act the same as in Donkey Kong Country.

A tipped over oil drum appears in the background of Klubba's Kiosk in both Donkey Kong Country 2 and Donkey Kong Land 2. It has no effect on gameplay.

Traditional oil drums are not in Mario vs. Donkey Kong; however, the Oil enemy from the Game Boy Donkey Kong reappears, redesigned to look more like a drum is covering its lower half.

In Mario vs. Donkey Kong 2: March of the Minis, oil drums are known as oil cans, and function identically to their appearance in the original Donkey Kong arcade game. If Donkey Kong throws a barrel and it lands in an oil can, a Fireball enemy is created. They only appear in the final battle against Donkey Kong on the Roof and in B1 in DK's Hideout.

While oil drums do not appear in DK: Jungle Climber, it features similar objects, known as oil barrels, that are used to fuel Funky Kong's airplane.

An oil drum makes a minor appearance in the Donkey Kong microgame in both WarioWare: D.I.Y. Showcase and WarioWare Gold, since the microgame is set in the 25m stage of the original arcade game. However, the oil drum has no bearing on gameplay.

A small burning oil drum looking similar to the one from the arcade Donkey Kong makes an appearance on the Donkey Kong Board from Mario Party 10. It can be seen next to a Special Dice Block Space on the right side of the board. Additionally, 8-bit sprite renders of oil drums are engraved on two blocks in the north-western part of the board.

In Super Mario Odyssey, oil drums are found in 8-bit segments in the Metro Kingdom and the Darker Side, using their appearance from Donkey Kong. Falling onto an oil drum causes Mario to take damage.

One of Rabbid Cranky's Barrel Bolts in the Donkey Kong Adventure DLC of Mario + Rabbids Kingdom Battle is styled after an oil drum from its original arcade appearance. Its description even states that foes will not turn into flames with eyes when hit by this, a reference to the Fireball enemies.