Wall switches[1] are a type of switches found in the game Donkey Kong 64, the switches that can be activated by Diddy Kong's Chimpy Charge or Chunky Kong's Primate Punch. These switches have numerous different functions, such as opening doors, activating platforms, releasing a Golden Banana, etc. and can be found in all the levels of Donkey Kong 64. There are several types of these switches.

Three switches are found in the game, two with Chunky Kong's face, the other one with Diddy Kong's face.

They are found in a temple in Angry Aztec, in the room where Diddy rescues Tiny. Diddy will first need to Chimpy Charge the Diddy Switch in the room to make some platforms raise so he can reach the Switches. Once Diddy activates all the switches in order, Tiny is freed, and Diddy is rewarded with a Golden Banana.

Several Number Switches can be found in the game. Only Diddy Kong can access their room, thus activating them.

Several gongs can be found in the game. Only Diddy can activate them by Chimpy Charging. 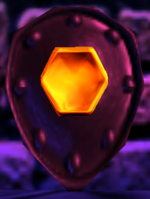 Three of them can be found in the museum of Creepy Castle. Activating all of them opens a skull with a rock inside, which is necessary to get the Golden Banana. Only Chunky can activate them.