“Please help me! Those awful tomatoes have eaten all my friends, and I'm the only one left!”
—Worm, Donkey Kong 64 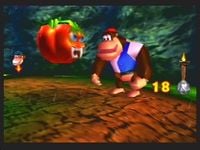 A Tomato jumping at Chunky

Tomatoes[1] are large, mutated tomato enemies in Donkey Kong 64. They have a sinister-looking face and a set of sharp teeth.

Many Tomatoes are found in Fungi Forest during the night, at the area near Funky's Store. If the Kong gets near a Tomato, it lunges to attack them. Tomatoes are invulnerable to nearly every attack, even musical instrument attacks, making them the only enemy to be affected by the attack. Tomatoes can only be defeated by Chunky Kong while he is using his Hunky Chunky form.