Candy's Music Shop, or Candy's Shop,[1] is a building owned and maintained by Candy Kong in Donkey Kong 64. It is featured in every world except for Jungle Japes, Fungi Forest and Hideout Helm.

In this store, the Kongs can each purchase their own instrument and upgrades for them. There are two instances where Candy adds an extra Watermelon to their life bar. After purchasing their instrument, the active Kong can have Candy replenish their instrument's energy, but this is also doable with Headphones.

Aside from the instruments, Candy offers a few more upgrades that slightly increases the Kongs' instrument capacity without using a Music Pad: 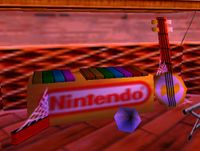 The instruments from the Banjo-Kazooie intro.