Klaptraps[1][2] (also spelled Klap Traps[3][4][5][6] or Klap-Traps[7]) are small Kremlings that first appear in Donkey Kong Country. Klaptraps are usually light blue (with bright yellow stripes on their back), but they can also come in a variety of colors, such as red, green, or purple. Their name comes from "claptrap," a word meaning "nonsense," playing off the enemy's snapping bear trap-like jaws.

Klaptraps resemble real world crocodiles more closely than most Kremlings, as they are quadrupedal and have large pair of jaws, hence their name. They are less anthropomorphic than other Kremlings and act like pets to the Kremling Krew. Klampons and Krimps from Donkey Kong Country 2: Diddy's Kong Quest and Donkey Kong Country 3: Dixie Kong's Double Trouble! respectively are similar in that regard.

Klaptraps are common enemies in their debut appearance, Donkey Kong Country. They behave similar to Gnawties, by moving in a single direction. A notable difference with Klaptraps is that they repeatedly chomp while moving around. As such, frontal attacks do not work on Klaptraps, as they will just damage Donkey Kong and Diddy Kong if they attempt to beat them that way. Given their short size, the Kongs can easily avoid Klaptraps by jumping over them. Expresso is unaffected by Klaptraps because it has long legs that Klaptraps move straight through.

Klaptraps have a purple variant who appear in Loopy Lights and also a Bonus Area of Trick Track Trek. In the Game Boy Color version, these Klaptraps are changed to brown, and in the Game Boy Advance version, they are changed to red. These Klaptraps behave mostly the same as their light blue counterpart, except that they jump whenever the Kongs do, thus making them harder to avoid than normal ones. Some purple Klaptraps remain in one spot and do not move around.

Klaptraps are one of the three Kremling enemies who reappear in the handheld title, Donkey Kong Land, the other two being Krushas and Kritters. They have the same behavior as in Donkey Kong Country, although the jumping Klaptraps do not reappear, likely due to the lack of color in-game.

Klaptraps reappear as enemies in Donkey Kong 64, where they are green rather than light blue. Their expression is more vicious rather than neutral and their behavior is similar to a guard dog, wearing collars and growling like one. This makes them somewhat resemble Krimps from Donkey Kong Country 3: Dixie Kong's Double Trouble!, which also have a similar, vicious expression, and have also been described as dog-like Kremlings, as well as wearing a dog collar.

Unlike their previous appearances, Klaptraps do not repeatedly chomp their jaws. Instead, when it sees the active Kong, it growls in a dog-like manner and chomps at them. Klaptraps can be defeated in one hit (including frontal attacks, which are ineffective in previous games); however, their set of dentures still remain and continually clamp after the Kongs. The dentures eventually break by either crashing into a wall or falling into water. If the Kongs use an Orange or their musical instrument move to defeat a Klaptrap, its teeth do not chase after it.

The game also features purple Klaptraps that are immune to every direct attack method that the Kongs have. They are even completely immune to the Kongs' shockwave attack; using it will just hurt the Kongs, while the purple Klaptrap is unaffected. They can only be defeated with an Orange or a musical instrument, and drop three Oranges upon defeat. There are also red Klaptraps, which only appear in two cutscenes. In one of them, the "Castle Intro", a giant red Klaptrap was sent out by K. Rool to execute a fleeing Kasplat.

In several cutscenes, a Klaptrap is sitting on King K. Rool's lap and being stroked by its master, likely a reference to James Bond villain Blofeld. K. Rool's pet Klaptrap is last seen startled by K. Rool when he's awoken by the alarm, revealing the Kongs have entered Hideout Helm.

A Klaptrap makes its first playable appearance during the minigame Beaver Bother, where its goal is to herd a number of Gnawties down a hole within a barrel by snarling at them.

In Diddy Kong Pilot's 2003 build, Klap Trap is a playable character and a member of Team Kremling. Klap Trap's name is in the first cup, Klap Trap Kup, and he can be unlocked by completing the cup and then beating him in a dogfight match. As a racer, Klap Trap has the highest acceleration and the lowest top speed of the racers. Unlike other games, Klap Trap speaks with vocalized dialogue and sounds like a bratty child. The Options screen has a "Multiplayer Weapons" option; if selected, a brief cutscene of a Klap Trap defeating another Klap Trap in a dogfight match is shown.

Klap Trap was replaced with Humba Wumba in the final build of this iteration, Banjo-Pilot, as indicated by their stats.

A blue and pink Klaptrap as they appear in 100M Vine Climb of Donkey Konga.

In Super Smash Bros. Melee, Klaptraps appear in Donkey Kong's stages, Kongo Jungle and Jungle Japes. They swim through the water rapids and jump out from it, attempting to damage fighters by biting them. Klaptraps can also fall into, occupy, and use the Barrel Cannon in Kongo Jungle. The Klaptraps on the Kongo Jungle stage are colored orange, while those on Jungle Japes are light blue.

In Super Smash Bros. Ultimate, Klaptraps in brown replacing orange and light blue appear in both Melee's Kongo Jungle (now renamed Kongo Falls) and Jungle Japes respectively, both of which return from Super Smash Bros. Melee. A Klaptrap also appears as the first and only Assist Trophy from the Donkey Kong series, where it lunges and bites on to opponents. If they are hit, they make the same sound they did when they were defeated in Donkey Kong Country. One additionally appears as an Advanced Attack spirit. The latter must be unlocked by playing Classic mode with King K. Rool and reaching the goal of the bonus stage within 45 seconds.

In Mario Superstar Baseball, green Klaptraps are obstacles in the Donkey Kong Jungle stadium. Similar to Mario Power Tennis, Klaptraps try to bite the outfielders' heels, causing them to slow down. If the batter hits the baseball into a Klaptrap's mouth, they earn a Team Star. 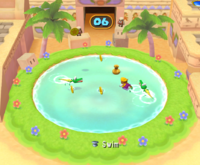 Klaptraps attempt to bite Wario as he tries to collect coins in the lake.

In Mario Party 7, two green Klaptraps appear in a lake in an oasis on Pyramid Park. If a player lands on a Happening Space in front of the lake, they will be asked to swim in it and collect coins. The Klaptraps become visible, and attempt to bite the player. If successful in their attack, the player will lose two coins. This is the only time an enemy from the Donkey Kong series appears in a Mario Party game. 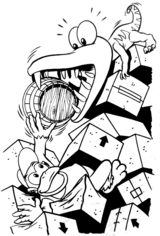 Illustration showing Diddy Kong with a Klap Trap, from Donkey Kong Country: Rumble in the Jungle

An individual Klap Trap appears as an antagonist in the Donkey Kong Country novel. An employee of the Kremling factory, Klap Trap has a small chat with his coworker Zinger about King K. Rool's absence at the site and he then notices that the Kongs are eavesdropping on them. Klap Trap lunges at the group, but Diddy Kong defeats him by doing a cartwheel. The Kongs destroy the factory shortly after.

In the novel Donkey Kong Country: Rumble in the Jungle, while looking for a replacement part for Funky Kong's barrel plane, Diddy Kong encounters a Klap Trap within the Kremlings' supply room. Diddy Kong immediately tries to attack the Klap Trap, however it quickly evades all of his attacks, causing Diddy to crash into a storage shelf. Diddy manages to lodge a barrel in the Klap Trap's jaws while it was charging towards him, allowing Diddy time to escape the store room with the water pump. 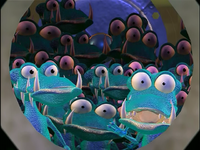 In the Donkey Kong Country animated series, Klaptraps are, instead of soldiers, ammunition for a weapon called a Klap-Blaster. Unlike the Klaptraps of the games, the ones on the show are capable of speaking. Often times when a Klaptrap is seen, it makes a sarcastic comment about its job or what it had just eaten. The show also features a singular Klaptrap character larger than his brethren.

Klaptrap coverage on other NIWA wikis: