It has been requested that more images be uploaded for this article. Remove this notice only after the additional image(s) have been added. Specifics: K-O-N-G Letters and remaining Bonus Levels.

Slipslide Ride is the eighteenth level of Donkey Kong Country and the second level of Gorilla Glacier.

The level takes place in an icy cavern where Donkey Kong and Diddy Kong must climb slippery ropes that forcefully slide them either up or down. The blue ropes slide the Kongs up and the purple ones slide them down. Many Zingers appear as the main obstacle of the level, especially around the ropes. The Kongs can climb in the opposite direction of the rope to better control their movements and avoid hitting a Zinger.

In the Game Boy Color remake, the color of the ropes were changed. White ropes slide upward while blue ropes slide downward. This was likely done to ensure visibility because the background of Slipslide Ride is purple. 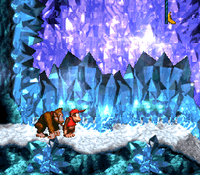 The Kongs stand at the beginning of the level

The Kongs are greeted by a hopping Kritter as they enter the level. A rope dangles above them here that can pull them into a secret area. Another rope hangs in a narrow passage farther ahead, which can pull the primates up to a piece of land with the DK Barrel wobbling on it. After walking up a slippery hill, the heroes encounter an Army and another rope that can lift them onto a ledge. The letter K floats in an alcove on the ceiling. The Kongs can find a purple rope to the right of here. As they slide down it, they must be cautious of a pair of Zingers, who guard the sides of an alcove with a barrel in it. When the Kongs reach the cold ground again, they can find a slanted pathway and a ledge ahead of them. An Army rolls off the ledge as they approach. They can find another rope above a lone Zinger on top of the ledge that pulls them up through a narrow passage.

At the top of this rope, two more ropes can be seen to the left above a Zinger. As they climb, they must alternate between ropes, as Zingers fly on top of them. A DK Barrel shakes in an alcove to the right of the ropes when the primates access the top of the area. To the left, they can find a slanted pathway with a gap at the end of it. A Necky with a Banana Bunch above it is above the gap. If the heroes jump into the narrow abyss, they land on the top of a steep, but small, hill. Another hill is located ahead after a flat pathway leading under a low ceiling of crystals. A small abyss follows, but the primates can cross it with the use of a purple rope, which has a Zinger under it. If they continue, they head down a long, steep hill with a pair of hopping Kritters at the bottom of it. Three more ropes dangle above an abyss ahead. Zingers as positioned around the ends of them, so the heroes must jump off of the objects quickly to avoid being pulled into them. The level's Continue Barrel waits at the other side of the abyss. 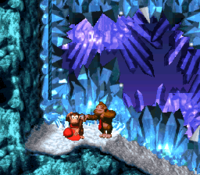 The primates travel mid-way through the level

If the duo journeys a bit farther, they can find a slanted surface with a blue rope on the other side of it. The rope pulls them to a steep slope with a Klaptrap and a Blast Barrel on it. As they ride up the rope, the are lifted past a DK Barrel. The Blast Barrel mentioned previously can blast the Kongs into an area at a higher elevation, where there are a few Kritters and Klaptraps. A rope leading to the letter O in an alcove hangs above the Kritter. After a steep hill, the Kongs can find a large abyss with several blue ropes dangling above it. The ropes can pull them into the gap if they are not fast enough, but they can also bump into a Zinger at the top of the ropes if they move too fast. Once they cross the abyss, they can find a purple rope in a smaller gap with a Zinger at the bottom of it. Two ropes are present on the area of land ahead. The closest rope leads up to the next area, while the second rope leads up to an alcove with the letter N. Zingers fly are around this rope. From the top of the first rope, the heroes can find a path leading to the west. Two Klaptraps march along it, and they are followed by a blue rope with a Zinger in front of it.

An icy platform is located at the top of the rope with a large abyss next to it. This gap must be crossed using six separate purple ropes, most of which that have Zingers at the bottom of them. A smaller abyss follows the platform on the other side of this gap. If consists of a single purple rope that can pull the heroes downwards if they do not jump off of it fast enough. The platform after this pit carries a sign that indicates that the level is near complete. A pair of purple ropes hang parallel to each other above a gap ahead of here. Although the Kongs must climb up the ropes, they force them downwards. With good speed, the ropes can be climbed with the Kongs jump between them fast enough. Once the heroes reach the top of the ropes, they can find an area of land with some ropes placed across from it. The letter G floats above the first of the ropes. Ahead, an exit sign can be found. An opening in the wall is also nearby, and when it is entered, the level is completed.