This article is about the last non-boss level of Donkey Kong Country. For the Mario Party and Mario Party 2 minigame, see Platform Peril.

Platform Perils is a walkway level with several challenges. As the name suggests, Donkey Kong and Diddy Kong primarily traverse the level by moving on small arrow platforms, which previously appeared in Blackout Basement. The level exclusively features gray Krushas, whom can only be defeated by the Kongs throwing a barrel at them. (In the Game Boy Color remake, gray Krushas are also in Necky Nutmare.) The gray Krushas are usually on the arrow platforms, which the Kongs are required to use to proceed in the level. They can throw a nearby Vine Barrel at them to defeat them (or TNT Drums in the European version).

The first part of the level involves going across the walkways, with Armies and Klumps appearing along the way. Only a few DK Barrels are found along the path, so Donkey Kong is best used to handle these enemies. Later on, the rest of the level takes place on moving arrow platforms, most of them guarded by gray Krushas. After that is another section with a brief walkway with some Klumps. The last down arrow platform can be taken to reach an obscure Bonus Level at the end.

The Kongs begin the level on a set of long scaffolds that also support a barrel and a Krusha. A black platform floats in an abyss ahead that begins to pull them to a slanted platform when landed on. The primates are attacked by an Army as they walk up the pathway, which is followed by another scaffold that holds another Army, a barrel, and the level's first DK Barrel. Two black platforms float in an abyss immediately after here that can take them over and up to another set of scaffolds with a trio of Klumps on them. A trail of bananas to the right of the scaffolds with the letter K between them leads the heroes down to a black platform that can pull them back upwards. Two more black platforms are ahead, with a Zinger before each of them. The first platform carries them downwards, and then the second one carries them to a long scaffold after a Zinger. Another scaffold floats near here with a pair of Armies on it. 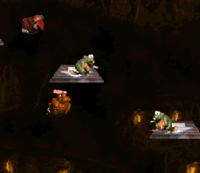 The Kongs miss a tricky platform

This is followed by a wide abyss that can be crossed with the help of a black platform that moves upwards when landed on. A small scaffold with two more black platforms next to it in another abyss is after this pit. A Zinger flies around both sides of the two platform, which both descend and then fall when touched. The primates can find two scaffolds holding some Armies ahead of here. An abyss follows the scaffolds, but it can be crossed with the use of a black platform that moves downwards when touched and a Necky that they can bounce on. On the other side of this pit, the duo can find two large scaffolds with a smaller one hanging above them that supports two Armies. An abyss nearby consists of four black platforms that move downwards when the heroes land on them, and several Zinger fly among each of them. After passing the abyss, the heroes reach a small scaffold holding a barrel that is followed by two groups of two scaffolds with Armies on them. A smaller, slanted scaffold hangs after these platforms, and it is followed by a black platform that pulls the heroes downwards to the letter O and another scaffold that hangs under the level's Continue Barrel, which is orbited by a Zinger. 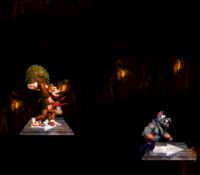 Donkey Kong prepares to hurl a barrel at a gray Krusha

Another abyss follows the scaffolds, and the primates can only cross it with the use of a black platform, which is blocked by a gray Krusha, whom the Kongs can only defeat by hitting it with a barrel. On the small scaffold after this pit, a sign indicating that the level is almost over can be found. In another huge abyss to the right of here, a black platform that travels east when landed on can be discovered next to a Zinger. The platform pulls them past a trail of bananas onto another platform that leads them farther east once activated. The platform supports barrel, which must be used to defeat a gray Krusha blocking the next platform located nearby. This platform can guide the duo upwards to a tire, which can bounce them onto another platform that pulls them farther upwards when touched. A barrel sits on it, which must be used to defeat a gray Krusha standing on the next platform. Once the primates get on this platform, they are guided to the east again, where they find another platform holding a barrel.

A Zinger flies in front of the platform, which begins to pull them back downwards when landed on. Soon, the Kongs encounter another gray Krusha on a black platform that moves to the east when touched. The primates can use the previously mentioned barrel to defeat it and progress onto the platform, which leads them to another platform holding nothing but a barrel. This platform falls down when landed on, forcing the Kongs to continue on the previous platform. A Krusha stands on the next black platform, but once the primates defeat it, they can safely reach it to be taken towards a tire. This tire can help them get onto another platform that can pull them to the west, where the letter G and the next platform can be discovered. This platform, supporting a barrel, can be used to travel to the east, where a Gnawty can be found on a platform that descends when landed on. A long set of scaffolds are immediately after this enemy, leading the heroes past a Klump towards the level's exit sign. The outlet of the level is ahead of the sign.