Clam City is the second underwater level, but unlike Coral Capers, it takes place in a sea rather than a lakebed. Clambos are the main enemy, and they spit out pearls at Donkey Kong and Diddy Kong. Some other enemies include Chomps, Chomps Jrs., Bitesizes, and Croctopuses are other enemies in the level. Clambos appear between all of these enemies. Enguarde can be freed from his animal crate in the level, by passing through a coral wall west of the first DK Barrel. Enguarde can help defeat many aquatic enemies along the way except for Croctopuses or Clambos. Like other underwater levels, Clam City does not have any Bonus Levels, and is the third level to not have any. 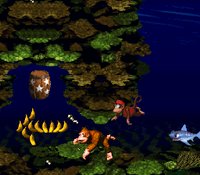 At the beginning of the level, the Kongs swim into an area that progressively becomes wider as they move forward. They can find a Clambo at the bottom corner of the area under a thin passage leading upwards. This passage takes them into another wide area, where the first DK Barrel in the level is located. Another passage leading to the south branches off of this area. As the heroes swim through it, they come past a Bitesize and a Clambo shooting pearls at them. A small channel under a coral wall is at the bottom of this passage. An area full of Bitesizes is on the other side of the passage, containing a small alcove with the letter O in it. After traveling into a slightly smaller area at the end of here, the Kongs come up to a Clambo, who shoots two pearls at once. Another passage is to the north of it. The passage becomes wider after the primates swim slightly higher, giving them more space to avoid the pearls of the many Clambos found throughout it. At the top of the wide passage, they can find a DK Barrel in a small alcove and another thin channel with a large area full of Chomps Jr. enemies after it. A passage at the other side of this area includes an alcove with the level's Continue Barrel in it. A group of bananas forming into an arrow shape stand below the barrel.

The Kongs can find a wide pathway facing north ahead of here. A Clambo shoots pearls from the center of it. Another Clambo sits on a coral structure at the top of the area, shooting three pearls at once. Once the primates swim over it, they can find a pathway facing south, holding a lone Clambos in a small alcove. A smaller passage at the bottom of this area leads past a DK Barrel and into a wide passage leading to the north. As the Kongs progress through it, they come up to five Chomps enemies and then the letter N, located at the top of the area in a corner. A tight channel leading into another open area is to the right of here with another Clambo in it. The enemy, who guards a Winky Token, shoots several pearls at once. If the duo manages to dodge the pearl projectiles, they can access a section full of many Croctopuses. At this point, they can find a sign that indicates that the level is almost complete. Once they pass the octopus-like foes, they move through another short channel and enter a square-shaped area containing a Clambo on a coral structure with the letter G under it. An exit sign stands on the opposite side of the enemies, pointing to the exit.

After going through the exit, the Kongs can fight Queen B. at Bumble B. Rumble. In the Game Boy Advance remake, finishing the level unlocks Cranky's Cabin, Candy's Dance Studio, and the level Temple Tempest. 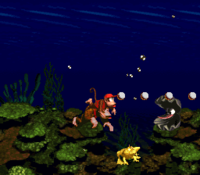 The Kongs approach a Clambo, which guards a Winky Token