This article is about the shark enemies in the Donkey Kong franchise. For other uses, see Chomp (disambiguation).

Chomps, also named Sharks,[1] are underwater shark enemies who populate the waters of Donkey Kong Island. They resemble tiger sharks and swim at moderate speed, biting any Kong upon contact. They have a smaller variant, known as Chomps Jrs. Chomps first appear in Donkey Kong Country. 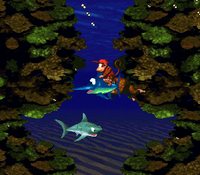 A Chomps in Coral Capers

A Chomps next to the letter Y in the Game Boy Color remake.

In Donkey Kong Country, Chomps are encountered in three of the four underwater stages: Coral Capers, Clam City, and Croctopus Chase. Although Chomps are larger than some underwater enemies, such as Bitesizes, they are as strong as them. Chomps are the slowest moving underwater enemy, although their height compensates for this because it is easier for the Kongs hit into them. Like Bitesizes and Chomps Jrs., Chomps swim around in a slightly wavy fashion. They can only be defeated from Enguarde's stab attack.

In the Game Boy Color version, a sticker of Chomps with the "Y" letter can be printed from the Game Boy Printer.

In the Club Nintendo comic adaptation of Donkey Kong Country, two Chomps try to attack Donkey Kong and Diddy Kong. They are supposedly a part of the "Chomp Police". This seems to be a self-promoted position, given that the other underwater creatures dislike them.

Chomps return in Donkey Kong Land, although they borrow the appearance of Chomps Jrs. from the previous game. This is suggested by an official Donkey Kong Land guide book published in Japan, which lists the regular Chomps as an enemy instead of Chomps Jr.

Chomps roam the submerged parts of Kremlantis, being found in Kremlantis Kaos, Chomp's Coliseum, and Nautilus Chase. Like the other underwater enemies, Chomps cannot be defeated because of Enguarde's absence from the game. Despite this, there are unused defeat sprites for Chomps in the game.[2]

Chomps reappear as enemies in Donkey Kong Barrel Blast, during the underwater sections of Salty Sea, Shimmering Sea, and Open Ocean. They are much bigger and look more intimidating than before, but can still be defeated from a single hit. Electrified Chomps are also found on Open Ocean. Like normal Chomps, they can be defeated in one hit, but the Chomps will also electrocute a racer and make them lose their speed, unless the racer attacked it while invincible.

Several Chomps are seen in the trailer for Donkey Kong Racing in the background of the logo, and underwater when Tiny Kong and Diddy Kong are riding on a regular Enguarde and a purple Enguarde.