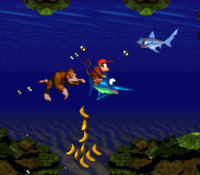 The Kongs and Enguarde swim toward a Chomps Jr. in Coral Capers

A Chomps Jr. next to the letter Z in the Game Boy Color conversion.

In Donkey Kong Country, Chomps Jrs. appear in all four underwater levels, Coral Capers, Clam City, Croctopus Chase, and Poison Pond. Just like their larger counterpart, Chomps Jrs. attack either Donkey Kong or Diddy Kong by swimming into them. They move considerably faster than Chomps, at the cost of being smaller and easier to avoid. Like the other underwater enemies, Chomps Jrs. cannot be defeated by the Kongs alone; they can only be defeated if they are stabbed by Enguarde.

Chomps Jr. appears in a short segment of the ending credits in Donkey Kong's Treehouse, where it chases a Squidge off-screen, possibly trying to eat it. It then swims back on-screen, fleeing from a group of four angry Squidges.

In the Game Boy Color conversion, the player can print a sticker of Chomps Jr. with the letter Z from the Game Boy Printer.

In the Game Boy Advance remake, Chomps Jrs. appear in the Funky's Fishing mini-game. In the main game, Chomps Jrs. are the main feature of Vine Valley's challenge, where the Kongs must reel in 15 Chomps Jrs. within the time limit.