“For aquatic adventuring, Enguarde is essential. While riding him, you do not need to press the

Button to swim; the Control Pad directional arrows are enough. By pressing the

Button, you can get a burst of speed during which Enguarde's sword nose becomes a deadly weapon. Needless to say, you won't find Enguarde anywhere but underwater.”
—Donkey Kong Country instruction booklet, page 25

Enguarde is a blue swordfish and a recurring Animal Friend who appears in the Donkey Kong franchise, starting with Donkey Kong Country. As an aquatic creature, Enguarde appears in many underwater areas. With his sharp, pointed bill, Enguarde can defeat many underwater enemies, which the Kongs cannot do by themselves. Enguarde is capable of moving around fast while underwater. While usually portrayed as an individual, occasionally multiple Enguardes can be seen at once.

Enguarde and Rambi are tied with having the most playable appearances. Enguarde has appeared in the first three Donkey Kong Country games, the second and third Donkey Kong Land games, Donkey Kong 64, and Donkey Kong Barrel Blast.

His name is taken from the French phrase used in fencing: "En garde" ("on guard", "put your guard up", ie: "be ready"), presumably due to Enguarde's long, sword-shaped bill.

In Donkey Kong Country, Enguarde appears in all four underwater levels, starting with Coral Capers. He also appears in Clam City, Croctopus Chase, and Poison Pond. Coral Capers has two Enguarde Boxes unlike the other levels, which only have one animal crate.

It is optional for Donkey Kong and Diddy Kong to ride Enguarde in every level, as his main role is helping them defeat underwater enemies. If Enguarde gets hit by an enemy, he swims away, and the Kongs can get back onto Enguarde by swimming on to him. Enguarde cannot defeat Clambos, Croctopuses, and Mincers, which also cause him to swim away.

Like the other Animal Friends, there are animal tokens in the shape of Enguarde. By collecting three Enguarde Tokens, the player is redirected to the Enguarde Bonus!, an underwater area with a red background. Here Enguarde must collect as many mini Enguarde Tokens within the time limit. 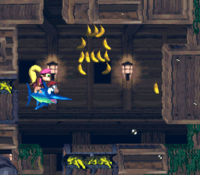 Enguarde reappears in many of the underwater levels of Donkey Kong Country 2: Diddy's Kong Quest. He appears in five levels, in order from Lockjaw's Locker, Lava Lagoon, Arctic Abyss, Clapper's Cavern and Animal Antics. He does not appear in some underwater levels, such as Glimmer's Galleon, which instead features another aquatic Animal Friend, Glimmer.

The game introduces Enguarde's Superstab maneuver, where he can build up energy and then release to quickly charge into a straight direction. Unlike the previous game, the Kongs are required to use Enguarde, whose Supercharge ability must be used to break open a fragile wall so they can enter a Bonus Level. In Arctic Abyss, Clapper's Cavern and Animal Antics, there is a part where the Kongs must enter an Animal Barrel to transform into Enguarde. Enguarde is the second Animal Friend with a section in Animal Antics.

In the Swanky's Bonus Bonanza of Gloomy Gulch, during the "Gibbon Game" challenge, a question asks what "Enguarde," "Swordy," and "Stabber."

Enguarde reappears in Donkey Kong Land 2 and retains his Superstab ability from Donkey Kong Country 2: Diddy's Kong Quest. Like the other Animal Friends, Diddy and Dixie can no longer ride Enguarde, whom they must instead transform into via an Animal Barrel.

Enguarde does not have his own section in Animal Antics unlike the previous game's counterpart. 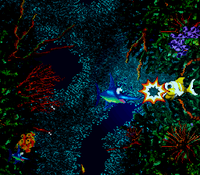 Enguarde makes his fourth game appearance in Donkey Kong Country 3: Dixie Kong's Double Trouble!, and retains his abilities from the predecessor, Donkey Kong Country 2: Diddy's Kong Quest. Enguarde is one of the three Animal Friends to fight a boss, specifically the Razor Ridge boss level, Barbos's Barrier, where Enguarde fights the mother of the Lurchins, Barbos. He can attack Barbos and Lurchins alike by performing a Supercharge on the squishy center part of their body. Enguarde cannot defeat a Lurchin or Barbos by stabbing their spiky shell, which injures him instead.

In the Game Boy Advance version, Enguarde appears in two levels of Pacifica, and fights Barbos at the end of Pacifica rather than in Razor Ridge.

In Donkey Kong 64, Enguarde (also named Enguard the Swordfish[1] or simply Enguard[2]) only appears in Gloomy Galleon, and Lanky Kong is the only Kong who can enter the Enguarde Box to transform into Enguarde. Enguarde Boxes are present in both the lighthouse and shipwreck areas of the level. Unlike the Donkey Kong Country and Donkey Kong Land games, Enguarde cannot defeat underwater enemies, though he can charge into treasure chests to destroy them and reveal hidden items. Enguarde has the ability to jump out of the water, and doing so is necessary in the shipwreck area, where Enguarde must jump through a DK Star three times in order to open the Coin Room.

Enguarde is featured in an unlockable minigame, the Enguarde Arena, which can be unlocked under the Mystery menu once the player captures six Banana Fairies in Adventure mode. The minigame's objective is for Enguarde to jump through as many stars with the DK logo within the time limit.

Enguarde appears in Donkey Kong Barrel Blast as a ridable Animal Friend in underwater racetracks once he is released from his crate. In this game, he can ram through anything in his path, including an electrified Chomps. Him and Rambi cannot hurt other racers by ramming into them, but they are unaffected by attacks and Wild Moves from other players as well as all items, except for the reversed control effects and loss of Wild Moves from a Mega TNT Barrel. Enguarde is found in the underwater portions of Salty Sea and Open Ocean.

Enguarde appeared as Donkey and Diddy's Animal Friend in the third part of Club Nintendo's comic "Donkey Kong Country". Donkey Kong and Diddy Kong ride him through a body of water, while being attacked by several underwater enemies. An exploding TNT Barrel pushes them out of the water and onto King K. Rool's ship Gangplank Galleon, after which Enguarde does not appear again.

Enguarde appears in issue 14 of Super Mario-Kun. After Donkey Kong and Diddy Kong ride on a fake Enguarde, Mario and Yoshi find a box that contains Enguarde. They meet Donkey Kong and Diddy Kong in ropes. Before Mario can do anything, he gets attacked by a Croctopus. Enguarde saves him, but a Clambo breaks his nose. Mario responds by attaching a drill to his nose. Enguarde then plows through the Croctopus, breaking its arms.

Enguarde makes an appearance as both a Donkey Kong series trophy and a sticker in Super Smash Bros. Brawl. Both can be obtained when they appear at random in Vs. matches, Adventure Mode or other modes of the game. The sticker can be used on Donkey Kong and Diddy Kong in the Subspace Emissary to boost their attack power by 15 points.

Enguarde reprises its role as a Donkey Kong series trophy in Super Smash Bros. for Wii U. It can appear at random in various modes of the game.

Enguarde appears as an Advanced-class Attack-type primary spirit in Super Smash Bros. Ultimate. When equipped, it boosts the fighter's power but increases the damage taken by electric attacks. In World of Light, the spirit is encountered in the Coral Capers spot on the DK Island sub-map of the Light Realm. The spirit's puppet fighter is a male Corrin in a low-buoyancy fight on the Great Bay stage.

Enguarde makes a cameo appearance in Picross NP Vol. 8 as one of the images that must be cleared.

In the Donkey Kong Adventure story of Mario + Rabbids Kingdom Battle, one of Rabbid Peach's Sentry weapons, the Trophy Fish Terror, is based on Enguarde's appearance. The weapon's description reassures that Enguarde is "safe and sound" despite the implication in the weapon's name that he was hunted and turned into a trophy.

Enguarde appears while being ridden by Tiny Kong underwater in early screenshots and during the trailer of the canceled Donkey Kong Racing, along with a slightly larger purple Enguarde ridden by Diddy Kong. It is unknown if the purple Enguarde would have had any distinctive qualities aside from its color.

Enguarde was replaced with the dolphins from Banjo-Kazooie: Grunty's Revenge in the final version of this iteration, Banjo-Pilot.

The development team of Donkey Kong Country: Tropical Freeze wanted to add more Animal Friends to the game, with Enguarde being considered.[3]