Karbines are small robotic owl-like enemies that appear in Donkey Kong Country 3: Dixie Kong's Double Trouble! and Donkey Kong Land III. They are named after carbines, which are firearms similar to a rifle or musket.

In Donkey Kong Country 3: Dixie Kong's Double Trouble!, Karbines only appear in two levels, being Fire-Ball Frenzy, where they are the main obstacle, and Blazing Bazukas, where only one appears. Karbines carry large cannons similar to those of Bazukas. They appear in the background where they follow around Dixie Kong and Kiddy Kong and shoot fireballs out their cannon at the Kongs. After releasing a fireball, the Karbine takes a few second interval before firing out the next one. Karbines cannot be defeated and should only be avoided by the Kongs. After a while, the Karbine stops following Dixie and Kiddy.

Karbines often appear together in small groups, where they often rhythmically fire in succession from right to left. Sometimes, in groups of threes, the first and third Karbines fire simultaneously, followed by the middle one. Some Karbines shoot out three fireballs in a row before pausing. There are four Karbines that appear just before the Level Flag.

In Dixie Kong's Photo Album, during the ending, Karbines are categorized under Flying Fiends.

In the Game Boy Advance version, some Karbines have shorter intervals between shooting fireballs, which means that the Kongs have less time to avoid their fireballs.

It has been requested that this section be rewritten and expanded to include more information. Reason: include information on fireball patterns in Donkey Kong Land III

In Donkey Kong Land III, Karbine appear in four levels: Karbine Kaos, Bazuka Bombard, Kuchuka Karnage, and Barrel Boulevard. Karbine's name is featured in their first level appearance, Karbine Kaos. In the same level, Squitter appears, and he is shown to be invulnerable to Karbine's fireballs as long as he remains on the ground.

Karbine's fireballs have the same sprite as Bleak's snowballs in Donkey Kong Land III. In the Game Boy Color port, this includes the color palette, where both share a faint purple color. 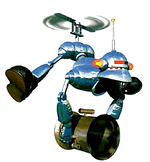 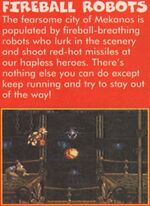