Ripsaw Rage is the eighteenth level in Donkey Kong Country 3: Dixie Kong's Double Trouble! and the third level of Mekanos. It is a vertical level that takes place within two large hollow trees that Dixie Kong and Kiddy Kong must ascend. There is a ripsaw slowly cutting upward through the trees, and the Kongs must be quick to avoid being cut by the ripsaw or else they lose a life. The level mainly consists of Sneeks but it also has a few Buzzes. Like the Kongs, the Buzzes and Sneeks are instantly defeated when they are caught in the ripsaw.

At the start of the level the Kongs will be inside of a large tree towards the left. They must jump up to the top and exit the tree and walk across a branch to enter another tree. The letter K is found at the second tree's entrance. The monkeys should jump up the other tree, and they will find a DK Barrel just before the exit. They should then leave that tree and enter the tree on the left, avoiding a Buzz. In the next tree they will have to defeat a Sneek before leaving to the exterior momentarily, then re-entering, finding another Sneek. they must climb up that tree, which is empty. After exiting from the right, they must climb up the outside of the two trees, where they will find some bananas. The next tree is a little different. As soon as they enter, they must exit and climb quickly around the outer branches and back into the tree to avoid being cut. The apes should then run across to the other tree, where they will find some bananas, and the letter O. Exiting to the outer branches and continuing upwards, the Kongs will find a barrel which is the key to the first Bonus Area. They must then enter another small area of a tree, which has one Sneek. One they exit the tree they will find yet another Sneek. They need to jump us this tree to find the Star Barrel. 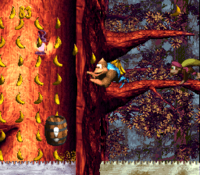 Dixie and Kiddy traveling through the level.

Past the halfway point, the Kongs must quickly run out of the tree and then re-enter, then jump across to the left tree. They will find a Sneek there. They need to continue upwards, where they will find a DK Barrel before entering the next tree. In the next tree section there is simply one Sneek and some bananas. After exiting that tree, the apes need to jump to the left tree, grabbing the letter N along the way. They should continue to run forward, entering and then exiting the tree, or they will be cut easily. They need to go up before re-entering the tree, which should be exited quickly. The Kongs should jump across to the other tree, and they will find a bear coin there. In this tree they will need to run from left to right on the long platforms while defeating four Sneeks. They should then jump to the branch area, where they will need to climb up until finding a hole in the left tree, which they should go through and kill a Sneek. They will exit the tree briefly and find a DK Barrel out side. They will soon re-enter and jump across to a short section of the right tree, while collecting some bananas. They will soon jump over to the left tree where they will find a Steel Keg needed to get to the second Bonus Area. Continuing up, they should exit the tree to the left, then re-enter, jump across, and grab the letter G. They should then jump to the right tree, climb up quickly, and then exit to the branched area, finding a small alcove where the Level Flag is. Getting to the end of the level unlocks the level Blazing Bazukas. It also gives access to Wrinkly's Save Cave (or Cranky's Dojo in the Game Boy Advance remake).