Rocket Barrel Ride is the twelfth level in Donkey Kong Country 3: Dixie Kong's Double Trouble! It is also the second area of Cotton Top Cove. Set at a series of waterfalls, Dixie and Kiddy must utilize Booster Barrels ascend the level. If the Kongs miss a platform, they fall a distance down the level until hitting a platform or possibly into an abyss, the latter of which causes them to lose an extra life. The Kongs must avoid some enemies on the way, especially Buzzes. Sometimes, the path can go behind a waterfall, allowing the Kongs to walk behind it. The Kongs cannot jump from behind a waterfall to progress on the path in front. Krimps are the most common enemy on land, and the Kongs also encounter a few Knik-Knaks and Krumples along the way. Parry the Parallel Bird makes his second appearance in the latter part of the level. If the Kongs successfully take Parry across a No Animal Sign, they are rewarded a Blue Balloon. 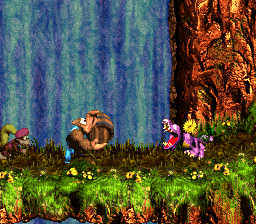 Kiddy holding a barrel at a Krimp

About halfway into the level, the heroes should take two passages in front and behind some waterfalls. At the far left end of the area, they will make their way into a set of Auto-Fire Barrels, which will blast them to a ledge. Heading on, the group should walk in front of another waterfall nearby to notice another Booster Barrel. The barrel will drop them off near another Booster Barrel. This Booster Barrel, once entered, will raise the Kongs to a great distance, then letting them out in mid-air. Landing in another Booster Barrel, the apes will continue upwards, dodging some Buzzes, until they are shot to the letter N. Traveling to the left of the item, Dixie Kong and her partner will walk across more of the wet pathway and find a set of platforms behind a waterfall. If they hop between some Buzzes, the monkeys will make their way to an area in front of a waterfall. After getting through this small area, they will soon notice another pathway behind the same waterfall. If the heroes manage to get behind the falls safely, they will climb up a wall of dirt and cross a gap. Once they do so, they will find another set of platforms stretching behind a waterfall. Jumping upwards on each other the three pathways, they will make it to the highest of the platforms, where they will need to head into a nearby Auto-Fire Barrel. The barrel will automatically shoot them to a higher area. In this area, the Kongs will hop between two Buzzes and pass the No Animal Sign for Parry the Parallel Bird, if they lead the bird up to this point. Heading on, the monkeys will get in a Booster Barrel that will drop them off on a ledge near the letter G. Climbing behind another waterfall with a small platform, they will find a few Buzzes surrounding a Booster Barrel. After dodging the enemies, the group should carefully get in the barrel and be shot up to the level's highest point. If they travel to the right, they will find a flagpole. Raising its flag will end the level.