Kreeping Klasps is the thirteenth level of Donkey Kong Country 3: Dixie Kong's Double Trouble! and the third level of Cotton Top Cove. In this boardwalk level, Dixie and Kiddy must reach the end by climbing across a series of horizontal ropes and walking across some boardwalks. At the start, there is a crack in the boardwalk that breaks if Dixie performs team up and throws Kiddy onto it. They can collect a bear coin within the gap. Kiddy can throw Dixie above the level entrance to obtain a Red Balloon. As the level's name suggests, Klasps are the main enemy, and they climb across the ropes throughout the level. If the Kongs touch a Klasp, it explodes, and the player loses the lead Kong. A Nibbla follows the Kongs in the river below, so the Kongs cannot swim under the Klasps. There are also some Re-Koils, Kobbles, and Buzzes in the level. 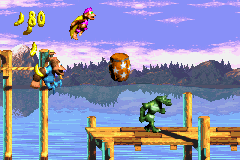 When the level begins, the Kongs make their way across several boardwalks and soon come up to the first tightrope. After climbing across this rope, they hop over a small gap and grab onto another tightrope. On this long tightrope, they have to avoid a long Klasp, and then jump to another rope above the dangerous water. After moving across this short rope, they make it to a third tightrope. At the end of this rope, they make their way back onto some boardwalks and have to cling onto some more tightropes. Jumping to the rope above them from there, the heroes are up to the challenge of climbing across a Klasp infested tightrope. Moving along the whole rope, they have to avoid several Klasps, and then to a much smaller separate rope. Letting go of this rope throws the Kongs into the Star Barrel.

About halfway into the level, the group head onto another tightrope over the deadly water. Jumping over another Klasp, they soon get onto another long rope. Hopping onto another rope above it, they enter an area with three nearby Klasps. Avoiding each one, they make it back on the boardwalks. On this safe pathway, they walk down a slanted boardwalk and hop to a small tightrope with the letter N on it. After this, the two monkeys need to bounce on a Re-Koil to make it to another tightrope. Once they hop off of the first rope, they find the letter G. Farther on, they hop to a few more ropes, avoiding some Klasps, to make it to a very small tightrope. Jumping off of this rope takes the Kongs to three Re-Koils, all occupying their own platform. After bouncing off of each one and grabbing onto the next tightrope, Kiddy Kong and Dixie Kong have to avoid a Klasp and hop to another rope. On this rope, they are greeted by a second Klasp. Dodging the foe, they soon make it onto more boardwalks. Walking a little farther, the group eventually find a rather small flagpole. If they grab onto the end of the pole, the flag rises and the level ends.