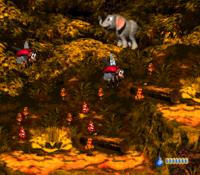 In Bobbing Barrel Brawl, Ellie must jump from two red Knik-Knaks to gain enough momentum to enter a Bonus Barrel into a nearby pool.

In Donkey Kong Country 3: Dixie Kong's Double Trouble!, Knik-Knaks appear in two color variations, red and yellow. The red Knik-Knaks continuously flap their wings to remain airborne; most of them do not move around. This behavior is shared with Flitters from the previous game, Donkey Kong Country 2: Diddy's Kong Quest. The red Knik-Knaks can be defeated with a single hit from the Kongs, usually by jumping on them. There are instances where the Kongs must jump from Knik-Knaks to reach a Bonus Area or to obtain items, such as an Extra Life Balloon.

At some point during Bobbing Barrel Brawl, Ellie the Elephant encounters two red Knik-Knaks briefly walking on the ground and then taking off. At some point, the two Knik-Knaks stop moving and remain in one position. Ellie must jump from both Knik-Knaks to gain enough momentum to fall down into the second Bonus Barrel at the bottom of a nearby pool.

According to the game's credits, Knik-Knaks are a part of the "Terrorfirma Tuff Guys" enemy class.

In Donkey Kong Land III, Knik-Knaks were renamed to Niknaks, as shown in the ending credits. Only the flying Niknaks return in the game: their ground variant does not return. In the Game Boy Color port, these Niknaks are red, just like in their debut appearance.

Unless otherwise noted, all Knik-Knaks in the following levels are red: