A Bonus Barrel,[1] also formatted as Bonus barrel[2] or bonus barrel,[3] is a recurring barrel that takes the Kongs to a Bonus Level. It first appears in Donkey Kong Country 2: Diddy's Kong Quest as a replacement for the Blast Barrels from Donkey Kong Country that carry the Kongs up into a Bonus Level. Bonus Barrels have since appeared in many Donkey Kong titles. In most of their appearances, Bonus Barrels are identifiable from their large B symbol in the center, on a yellow explosion with a red border, and a white-rimmed opening on top.

When the Kongs jump into a Bonus Barrel, it automatically launches or warps them to a bonus room (the former effect is in the original versions, and the latter, which has the explosive "B" design fade out in a swirl-type effect, is in Donkey Kong Country 3: Dixie Kong's Double Trouble! and the Game Boy Advance remakes). In the bonus room, the Kongs can complete a challenge to win either a Kremkoin or a Bonus Coin, which are necessary for unlocking levels of the Lost World and adding to the completion percentage. If the Kongs lose the challenge, they are redirected back into a specific point of the main level; usually they are able to re-enter the Bonus Barrel and reattempt the challenge.

Bonus Barrels also appear in the Game Boy Advance remake of Donkey Kong Country, replacing the Blast Barrels that send Donkey Kong and Diddy Kong to a bonus room. The player can add to their completion score by simply entering a Bonus Barrel, more specifically the bonus room, in all three versions of the game. 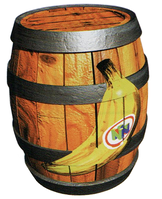 In Hideout Helm, there are five rooms connected to the main room with the Blast-o-Matic. Each room has two Bonus Barrels with a unique steel barrel-like design with King K. Rool's face. The Kongs are rewarded with a Banana Medal for each pair of challenges completed. These are also the only mandatory Bonus Barrels in the game, as they are needed to deactivate the machine.

The Training Barrels from the start of the game function similarly to Bonus Barrels.

In DK: King of Swing, Bonus Barrels once again warp to a Bonus Level, which rewards a Crystal Coconut if Donkey Kong or Diddy complete the challenge. Bonus Barrels are also larger than in previous games.

In DK: Jungle Climber, Bonus Barrels redirect the Kongs into the bonus game, Banana Bonanza. When they complete the mini-game, they are sent back into the level.

In DK Country, one of 18-Volt's microgames from WarioWare: D.I.Y. Showcase, the player must tap a moving Bonus Barrel to shoot Diddy Kong into the air while avoiding a Zinger.