Lockjaw Falls is one of the levels in Aqua World of DK: King of Swing. It and Kremling Kamp must be completed to unlock the world's fourth level, Ship of Souls.

The level takes place in front of a giant waterfall that is populated by a large number of Lockjaws who jump out at Donkey Kong (or Diddy Kong in Diddy Mode) to attack. The level also contains a few Zingers. Besides the usual pegs and peg boards, there are pegs that drop downwards along the falls that must be used to climb the waterfall. Wheels that can spin the Kong quickly and throw him far upwards (if he holds onto them correctly) are also present in Lockjaw Falls. As in most levels, a Bronze Medal and a Crystal Coconut can be found here.

At the beginning of the level, pegs can be found scattered along the waterfall that must be used to climb. A few bananas are placed around them, and a large number of Lockjaws attack the Kong on the way up. They can be seen out of the side of the screen before they attack. Eventually, the ape can reach the top of the area, where there is a ledge that leads to the second part of the level.

Here, a peg board can be found next to a large abyss that has a line of bananas floating above it. Pegs that are washed down by the waterfall soon head towards the Kong. He must use the cluster of pegs to climb to the top of the area. As he scales the area, he finds a few Zingers to the sides of him, along with some peg boards with bananas on them. At the top of the section, a pair of bananas and a ledge can be found. If Donkey Kong walks along the ledge, he enters the third area. 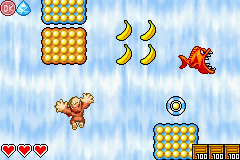 Donkey Kong at the beginning of the third area.

In this area, there are a few rotating pegs that can send the Kong high into the air, if he grabs onto them with the right hand. The first of these pegs is at the beginning of the area, and it can send him to a set of peg boards higher up. Four bananas float next to them. Another rotating peg is above the second of the pair of peg boards that can send the ape through four bananas and then to another two peg boards. As he travels upwards, Lockjaws attack him. A third rotating peg is above here that he can use to shoot through another four bananas onto the third pair of peg boards. A fourth spinning peg is to the left of these boards that can swing the ape to one last peg board with a fifth rotating peg above it. Using it, he can reach a ledge with an exit sign on it. When he lands next to it, the level is completed. Additionally, the primate can use the previous spinning peg to shoot high in the air towards a peg board hidden high up.