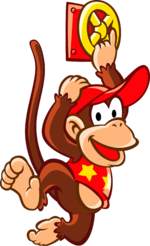 Artwork of Diddy Kong hanging from a Handle Peg

Handle Pegs[1] are variants of pegs from the game DK: King of Swing. These special pegs appear as a wheel which is situated on either a vertical or horizontal metal bar. If Donkey Kong grabs onto the wheel, the Handle Peg will carry him as it travels either across or up the metal bar. The direction which the Handle Peg moves differs depends on which hand grabs it. If

is used, the wheel will turn up on a vertical bar and right on a horizontal one. If

is used, the opposite happens for each respective bar. Once Donkey Kong lets go of it, the Handle Peg turns back to its original position. Handle Pegs are also found on Peg Boards as well. If their wheel is turned, they are able to rotate series of pegs or reveal new Peg Boards. They first appear towards the end of the level Contraption Cave in the Jungle World.

Handle Pegs return in DK: Jungle Climber; though they first appear in Toybox 2, they are also primarily featured in both Mega Amp battles. In both respective battles, Donkey Kong must turn a Switch Handle somewhere on the Mega Amp's chest as one of the actions necessary to eject the respective Kritters piloting the mech.