It has been requested that this article be rewritten and expanded to include more information. Reason: improve on general structure

DK: Jungle Climber, known as Donkey Kong: Jungle Climber in Japan and Europe, is a platformer of the DK series, released for the Nintendo DS in 2007. It is the sequel to the 2005 Game Boy Advance game, DK: King of Swing, and was developed by Paon and published by Nintendo. It was later re-released for the Wii U's Virtual Console in Japan and North America in July 2015 and in Europe and Australia in August 2015.

The Kong Family are on a vacation at Sun Sun Island. While they are there, Diddy notices a giant banana on a mountain. Cranky requests Donkey Kong to acquire it, and Diddy joins him.

On top of the mountain, King K. Rool and the Kremlings are stealing a Crystal Banana from an "alien". They plan to conquer the universe with it. A Banana Ship appears, and DK and Diddy battle it.

After the Kongs destroy the spaceship, a banana alien named Xananab exits from it. He apologizes for attacking the Kongs, whom he mistook for Kremlings. Xananab explains how K. Rool stole the Crystal Banana, and the Kongs go on a journey to retrieve it. 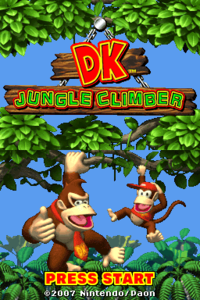 DK: Jungle Climber uses the same controls as its predecessor; the player using

to swing left and

to swing right. Pressing both

does a charge jump. Also, pressing

allows the player to talk to NPCs. More than one Kong will be playable at once in a style similar to the Donkey Kong Country/Land series, with one Kong following the other. However, the player can split the Kongs up to solve certain puzzles.

Several familiar characters appear in DK: Jungle Climber. Donkey Kong and Diddy are the only playable characters in Story Mode, while Dixie and Funky are playable in Wireless Multiplayer, just like in DK: King of Swing.

DK: Jungle Climber has a variety of items. Some are from the first three Donkey Kong Country titles, while others are entirely new items.

The following items are collectibles, found constantly and consistently throughout levels.

The following items are classified as tools - they rarely appear, and when they do, they are usually required for progression and must be used with a partner.

Bonus Barrels will also send the player to a minigame named Banana Bonanza, which consists of a banana-catching game, in which Donkey Kong is given a random-sized barrel and must catch as many bananas as the player can.

The game received positive reviews and was considered an improvement over DK: King of Swing. The game was also praised for its fun, practical controls and its vibrant visuals.

In several screenshots, there are some early levels such as a foggy area that was possibly the original Panic Factory. Another screenshot shows an underwater level in the sea with a Lockjaw. There were originally swing-like objects that were in the game. Also, some objects and backgrounds had different palettes. Lastly, the working title for this game was DK: King of Swing DS.

King K. Rool™ is up to no good again, and it’s up to Donkey Kong™ to swing into action. Using a simple control scheme that makes the game fun and easy to play, players of all skill levels can swing and climb to new heights.

Play as Donkey Kong, or choose to play as Diddy Kong™ in Adventure mode. Players can look forward to new moves, new items, and a bunch of mini-games that are sure to make them go bananas!