Cool Cool Cave is the fourth level in the first world of DK: Jungle Climber. 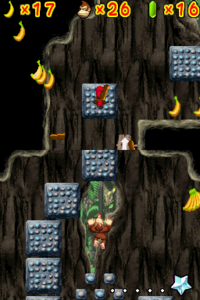 The level starts outside a cave, where Donkey Kong and must climb up some pegs. Immediately afterward, him and Diddy Kong encounter a Flitter, and a breakable wall on the right side. There are three breakable wooden barrels behind the wall, which the Kongs can break for the oil barrel. The Kongs must then climb up higher and go left to attack the second Flitter, which has the first Banana Coin. The Kongs must jump into a nearby Booster Barrel, which blasts them through a breakable wall and onto a ledge leading into the caverns. Additionally, the letter K is sitting just outside the cave entrance.

In the cave, the Kongs must grab onto a large boulder. The direction in which the boulder moves depends on which side of the boulder the Kongs are spinning on . The Kongs can spin the boulder left to reach the second Banana Coin, or spin right to continue moving through the level. By spinning it to the right a bit, the Kongs can jump onto a nearby ledge. An assortment of pegs, a Neek, and a DK Barrel are located directly above them. The Kongs must pass the Neek and hang onto another boulder. By spinning it to the right, the Kongs can break the adjacent barrel containing a Banana Bunch. By rolling it to the left, the Kongs can go onto another ledge with another set of pegs patrolled by a Neek, and a Booster Barrel above it. The Kongs can skip this segment if they jump up from the boulder midway and grab onto a peg board with a Booster Barrel located directly above it, and a 10-count Banana Bunch in between. The previous Booster Barrel blasts directly to this segment. By jumping into the following Booster Barrel, the Kongs are blasted off a wall and onto a high platform, where they can either continue walking left to obtain the letter O and the third Banana Coin, or move right past the arrow sign and into the following area.

The fourth and final section has three vertical paths: the leftmost being the main path and the other two each having a breakable barrel which can only be reached from using Diddy Attack. There is a Neek moving around on a square assortment of four peg boards, which is positioned between and below the second and third paths. By using Diddy Attack on the barrel from the rightmost path, the Kongs can obtain the fifth Banana Coin. The middle path has a barrel with a 10-count Banana Bunch. The Kongs must blast into a set of two breakable walls leading farther into the level. By breaking them and traveling upward, Donkey Kong and Diddy end up in a section with a couple of Flip-Flaps. They can use Diddy Attack on the fourth and final Question Barrel to spawn more peg boards, which they can climb on to reach the letter G, floating above a small, hovering platform. The Kongs can vertically blast through two sets of breakable walls, allowing them to jump from two more pegboards and continue upward into an isolated room appearing to take place outside. They also have an option to go from the slightly longer left path, which is guarded by a Flipflip. The final, outer room only has a floating pegboard and the Goal Gate on the right side. The Kongs can optionally go through a path at the top-left corner to enter a hidden room with the DK Coin and numerous gems.