The Donkey Konga series is a sub-series of the Donkey Kong franchise developed by Namco. It comprises three rhythm games released exclusively for the Nintendo GameCube. Donkey Konga is heavily based on Namco's long-running Taiko no Tatsujin series of arcade rhythm games, featuring identical gameplay and graphical elements but different tracklists and Donkey Kong-themed visuals. The series main distinguishing feature is support for a novelty bongo controller (sold separately or bundled with some releases of the games) to drum the selected song. This series eventually inspired the creation of Donkey Kong Jungle Beat, which also supports the use of bongos. 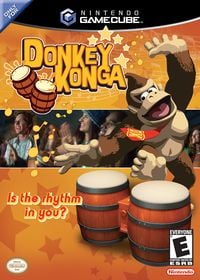 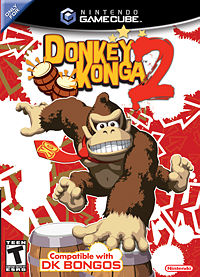 Donkey Konga 2, marketed in Japan as "Donkey Konga 2: Hit Song Parade!", was released a year after the previous game. Like its predecessor, it was first released in Japan. Donkey Kong, Diddy Kong, and Dixie Kong are the three playable characters. This game is also only available for the GameCube. It is the only game in the series to have an ESRB rating of T instead of E (for mild lyrics). 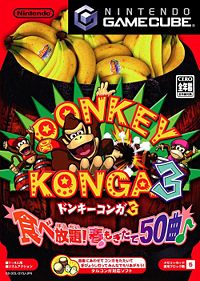 Donkey Konga 3 JP is the third and latest installment in the Donkey Kong series. It is the sequel to Donkey Konga and Donkey Konga 2. This game is only available in Japan for the Nintendo GameCube. The three playable characters from the previous installment are available, as well as Funky Kong. This game also supports bongo use. Clapping is also used during the song.