Donkey Kong Jr. Math was met with negative reviews and was the worst selling launch title for the Nintendo Entertainment System in North America. This game was recreated as an obtainable item in the game Animal Crossing and it was re-released the first time on the Virtual Console for the Wii (500 Wii Points) on September 3, 2007 and the Virtual Console for the Wii U ($4.99) in North America on August 28, 2014. 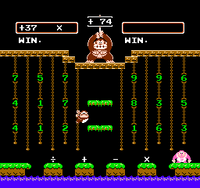 The game features a one and two player mode. In the single-player mode, the player's goal is to enter the answers to mathematical questions in order to receive points. The questions include addition, subtraction, multiplication and division. In the two player mode, both players control two Donkey Kong Juniors (a normal brown one and a pink one) that are on a race to create a math formula that equals the number shown by Donkey Kong. The gameplay is similar to that of Donkey Kong Jr.; players climb vines to reach higher areas. To create the math formulas, the player has to collect the numbers and the symbol(s) in the correct order that can be reached by using the vines.

Learning can be fun, especially when you play along with Donkey Kong Jr.!

Practice addition, subtraction, multiplication, and division by directing Junior, a cute little monkey, who must climb up and down vines to collect numbers and symbols in order to solve the math problems his father gives him.

Compete with a friend in a race to solve problems in Game A, or add more challenge with Game B. Of course, you can also practice on your own!

This game is perfect for younger players who are looking for a fun and easy way to develop their math skills!