Not to be confused with Donkey Kong (Game & Watch). 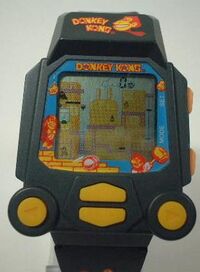 Donkey Kong is a watch containing an adaptation of Stage 1-7 of Donkey Kong for the Game Boy. It was released in 1994 as the last of four Mario Nelsonic Game Watches as a tie-in product for the Game Boy version. Zeon was responsible for distribution in Europe.

Donkey Kong was also available through a discounted mail-in offer with Kellogg's Corn Flakes breakfast cereal. However, the cereal box shows a possible unreleased prototype as it depicts 25m instead.

The watch has six buttons: two on the right side (for "Mode" and "Set"), and four on the bezel (for left, right, down, and up). To enter game mode, "Mode" must be held down until Pauline screams for help. Then, "left" can be pressed for a game without sound effects, while "right" can be pressed for a game including sound. Any arrow button starts the game with another scream from Pauline.

Pauline has been kidnapped by Donkey Kong and is held captive on a high tower in the big city. It is up to Mario to rescue her. The player starts with three lives, and there is a maximum of four.

Although the layout is very similar to that of Stage 1-7, many changes have been made in gameplay. Mario begins in the same position at the bottom left of the screen. However, Donkey Kong is on a new platform in the top left and throws barrels down at Mario. Mario must dodge the barrels while doing a Wire Spin on the Horizontal Bar to grab the Magic Hat, which grants him access to the ladder on his right. After climbing up, he needs to grab the Ladder Mark (known as the Arrow Block in the Game Boy version) that appears sporadically under Donkey Kong to reveal a temporary hanging ladder. To go down that ladder, Mario has to avoid the evil tortoise that patrols the platforms (the sprite is recycled from the Poison Mushrooms found in the Super Mario Bros. and Super Mario Bros. 3 game watches) or defeat it by grabbing a hammer. Once down the ladder, he needs to get on a moving platform and jump to take the Purse. This exposes the Bridge Mark, which he must collect along with the key. A temporary bridge appears on the top of the screen, so Mario must hurry up the elevator on the right. However, he must time it carefully to avoid having the evil tortoise meet him at the exit because he also has to get off at the top or be crushed. He then has to take the Umbrella and use it to move the lever on the bridge thrice while avoiding the evil tortoise. If he succeeds, the platform under Donkey Kong will disappear and he will fall, thereby freeing Pauline.