This article is about the platforming objects found in many games. For the item in Mario's Time Machine, see Ladder (item).

Mario next to a ladder in Donkey Kong

Ladders are objects first seen in the original Donkey Kong game. They have reappeared throughout many later games as inanimate objects that the player is able to climb to progress in the level, area, or stage. 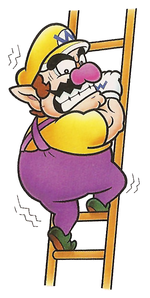 Ladders are found throughout Donkey Kong and serve as a connection between two platforms. In 25 m, Mario has to use them in order to get to the top and to avoid barrels and Fireballs, however, barrels can occasionally roll down the ladders and the Fireballs can climb up them as well. Some of the ladders are broken; Mario cannot climb these. He also cannot climb any ladders if he is carrying a hammer. Some of the ladders in the 50 m stage extend and retract. Mario can only climb those up completely if they are fully open.

Ladders reappear in Donkey Kong for the Game Boy in several varieties. The static and extending ladders from the original arcade game make a return in many levels of the game. Mario can only climb a ladder if he stands on solid ground, which is an important element in some levels, where he first has to place a road or jump on an icicle to have a platform to stand on from which he can climb the ladder. Another important element in the game's puzzles are ladders than can be placed by Mario himself, also known as Arrow Blocks[1]. If Mario jumps against one such vertical-facing block in the game, the game freezes and the player has to place the ladder in any free point of the level. The ladder will then extend itself upwards and downwards as far as it can. The ladder is timed, and disappears after the time has passed. This timer indicated with a music that starts playing as soon as the ladder is placed and gets faster gradually. The timer can be reset if Mario places another ladder within the first ladder's time limit, or any other placeable objects such as roads, Jump Stands, and blocks. After disappearing, the ladder can then be placed with the same block again.

Ladders reappear in VS. Wrecking Crew and Wrecking Crew, where they serve the same purpose they did in Donkey Kong. The enemies, Eggplant Men, Gotchawrenches, and Foreman Spike, can climb ladders. A type of ladders, ladder walls, appears in this game, where they must be destroyed.

Ladders first appeared in the Super Mario series in Super Mario Bros. 2, where they function similar to beanstalks. 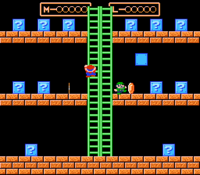 Mario on a ladder in the bonus round

In Super Mario Bros. 3, ladders appear in a bonus round in the 2-Player battle mode. The brothers have to use the ladders to find coins hidden in blue ? Blocks. The one who finds the most wins.

Ladders also appear in Super Mario Land's bonus game. One ladder, along with Mario, will move between the different platforms until the player presses

. Mario will then move along the platform, but if he comes across a ladder, Mario will move up or down it onto another platform, collecting a different reward.

In New Super Mario Bros. Wii, the only level to feature ladders is World 2-4, where they are made of ropes. Here, while strong gusts blow, the ladders are pushed up, making them unusable.

Several ladders also appear in Luigi's Mansion. One of them appears in Professor E. Gadd's laboratory, though it serves no function, and a second leads between the Courtyard and the Bottom of the Well. A third is found on the bunk bed in The Twins' Room, and two are found on the Roof.

In Mario vs. Donkey Kong, ladders appear in every world and plus world.

In Mario vs. Donkey Kong 2: March of the Minis, ladders appear on the Roof and in DK's Hideout. There are two retractable ladders on the Roof that are similar to the ones found in 50m of the original Donkey Kong arcade game.

In Mario vs. Donkey Kong: Mini-Land Mayhem!, Blue Ladders are present. They cause Mini Marios to immediately climb or descend it.

In Super Paper Mario, ladders are found in the Floro Caverns. Bowser is unable to climb up the ladder, most likely due to his size. If he tries, he struggles and mutters, "Can't climb this!"