This article is about Broozers and Barrels, a level in New Super Luigi U. For other uses, see Frosted Glacier-1.

Broozers and Barrels, or Frosted Glacier-1, is the first course of Frosted Glacier in New Super Luigi U. It is unlocked by completing Morton's Lava-Block Castle, and its own completion will unlock Cooligan Shrooms. In this level, there is a large snowman that was made to resemble Mario.

Luigi begins the level near two Star Lifts, along with two Broozers that cause the Star Lifts to spin by running into them. Above them, a platform with four barrels can be found, followed by a platform with four Broozers on it. Luigi can then jump on Note Blocks in order to reach a platform with Brick Blocks above it and another Star Lift. Another Broozer is encountered, along with Ice Piranha Plants that can be found in Warp Pipes. Three more Note Blocks are found, leading Luigi to another Star Lift and two Broozers with barrels. More Ice Piranha Plants are found in Warp Pipes, and Luigi must use Note Blocks in order to reach a platform found in between two Star Lifts. Two more Broozers are encountered. After two more platforms, Luigi arrives at a yellow Warp Pipe. The Warp Pipe takes Luigi to an area with pits and a Broozer punching a Star Lift, followed by the Goal Pole. If the player gets a time score with the last 2 matching digits, they will not only be greeted by Toad, but by a Luigi snowman, which is the level's hidden Luigi. 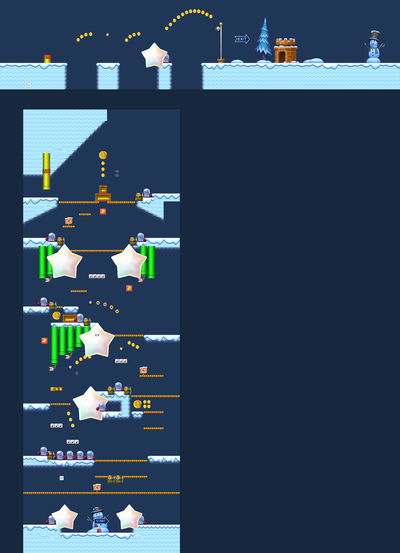