This article is about Stone-Snake Tower, a level in New Super Luigi U. For other uses, see Soda Jungle-Tower.

Tower, is the tower course of Soda Jungle in New Super Luigi U. It is unlocked by completing Dancing Blocks, Poison Swamp or Heart of Bramball Woods, and its own completion will unlock Boo's Favorite Haunt.

The level starts in a tower with a large Snake Block and a Mega Grrrol found behind Brick Blocks. A Mega ? Block is found above a Brick Block containing a 1-Up Mushroom. The Snake Block and the poison begin to rise, and Grrrols are spawned from the wall. A Red Ring is found, followed by another Mega Grrrol in front of a P Switch. A pair of Spinners also appears, and the Snake Block begins to rise. A second Snake Block is then found, followed by the boss door, which takes the player to Boom Boom. Magikoopa causes him to grow larger before the battle. He must then be hit three times in order to be defeated. 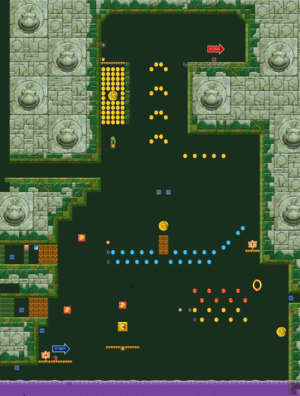