This article is about Hammerswing Hangout, a level in New Super Luigi U. For other uses, see Superstar Road-4.

Hammerswing Hangout, or Superstar Road-4, is the fourth course of Superstar Road in New Super Luigi U. It is unlocked by collecting every Star Coin in Frosted Glacier.

The player starts on icy terrain with a few ? Blocks and a Warp Pipe leading inside a tower. Inside are two Hammer Pendulums, swinging back and forth, and scrolling upward. Some platforms and a Fliprus are just above. After the first Star Coin, a Green Ring will appear. Some more platforms and Flipruses will be above. After more platforms, Flipruses and the second and third Star Coins, a Warp Pipe will appear, and it will lead the player to the Goal Pole. 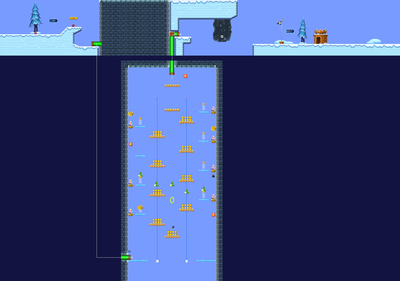